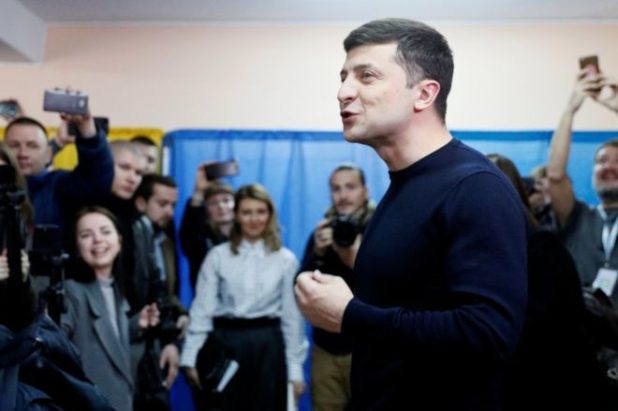 A comedian with no political experience has won the most votes in the first round of Ukraine’s presidential elections, according to exit polls.
They say Volodymyr Zelenskiy – who played the president on TV – received 30.4% of the vote, with current leader Petro Poroshenko second on 17.8%.

The two – who have expressed largely pro-EU opinions – are set to take part in a run-off election next month.
Ex-PM Yulia Tymoshenko appears to have been eliminated on a projected 14.2%.
The interior ministry says hundreds of electoral violations have been reported, but foreign observers say the vote appeared to be mainly smooth.
A total of 39 candidates were on the ballot paper, and with none receiving 50% the top two will go forward to the run-off on 21 April.
The Ukrainian president has significant powers over security, defence and foreign policy and the ex-Soviet republic’s system is described as semi-presidential.

Who is Volodymyr Zelenskiy?

Mr Zelenskiy is aiming to turn his satirical TV show – in which he portrays an ordinary citizen who becomes president after fighting corruption – into reality.
He has torn up the rulebook for election campaigning, staging no rallies and few interviews, and appears to have no strong political views apart from a wish to be new and different.
His extensive use of social media appealed to younger voters.
Mr Zelenskiy’s readiness to speak both Russian and Ukrainian, at a time when language rights are a hugely sensitive topic, gained him support in Ukraine’s largely Russian-speaking east.
–
Source: BBC