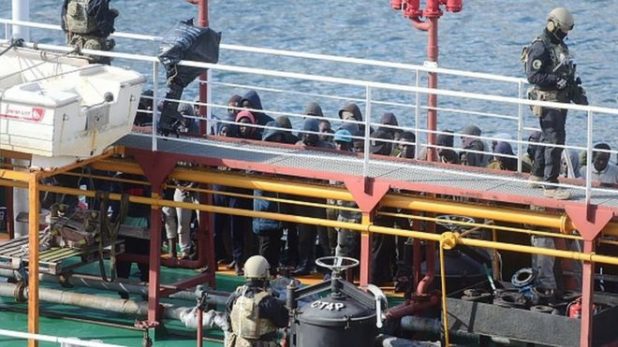 Three teenage migrants have been charged in Malta after “hijacking” an oil tanker, which is considered a terrorist activity under Maltese law.
One has been named as Abdalla Bari, 19, from Guinea. Two others, 15 and 16, are from Guinea and Ivory Coast and, as minors, cannot be identified.

All three deny the charges. They face up to 30 years in jail if found guilty.
The tanker, Elhiblu 1, had more than 100 migrants on board. All have been taken into custody.
The migrants had been rescued by the ship but reportedly hijacked it on Wednesday after being told they would be returned to Libya.
They are alleged to have told the captain to head north towards Europe instead.
A patrol vessel later stopped the tanker from entering Maltese territorial waters and a special operations team was dispatched to board and secure the vessel, the Armed Forces of Malta (AFM) said in a statement.
Malta’s Prime Minister Joseph Muscat has said all international rules will be followed as police investigate the incident.
The latest incident comes as the European Union says it is ending navy patrols in the Mediterranean. The EU says the decision to suspend Operation Sophia from September follows a request by Italy.
The mission was put in place four years ago to deter people smugglers and rescue migrants trying to reach Europe by boat. Tens of thousands of lives have been saved.
Lately, the mission has largely targeted smuggling networks as the number of people making the crossing dropped sharply following a controversial deal between the EU and Libya.
Italy’s Interior Minister Matteo Salvini has blamed Operation Sophia for continuing to bring rescued migrants to Italian shores.
Earlier this week, he described the alleged hijacking as “the first piracy on the high seas with migrants”, according to the Associated Press news agency.
Hassiba Hadjsahraoui of Medical aid group MSF told the BBC’s Newsday programme that the incident showed the despair of people who made the dangerous crossing over the Mediterranean.
She said the group had been involved in a similar case last November when migrants panicked and refused to leave a Panamanian-flagged cargo ship that rescued them and took them back to Libya.
Their trial continues.
–
Source: BBC