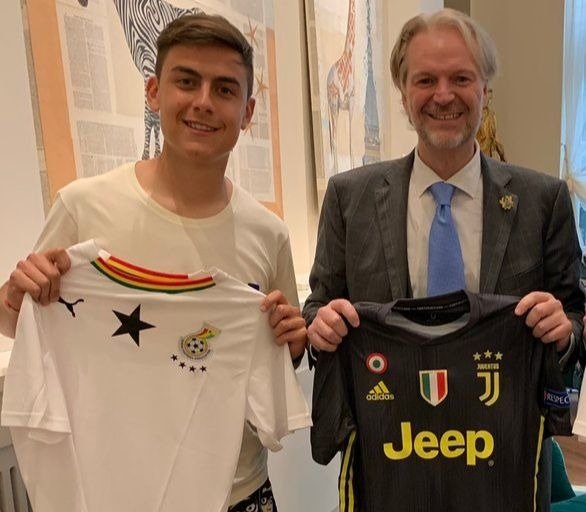 Argentine and Juventus star Paulo Dybala has expressed interest in supporting Ghanaian football so as to help the future generation of footballers.
The Juventus star disclosed his love for Ghana and his willingness to help with environmental issues as well as the development of football when he met the Ghana Consular to Italy, Massimiliano Taricone.
A world football star????????a unique sensibility for environmental problems.Even if very young he cares about children’s future.A sincere friend of Ghana.He will come to visit us soon and feel the warmth of our people,It was a privilege to know you @PauDybala_JR Akwaaba newBlackstar???????? pic.twitter.com/26Hr7nZ5r0
— Consolato del Ghana (@consoleghana) May 26, 2019
The 25-years-old footballer partners Messi in the Argentine national team – Albicelestes – and plays alongside Cristiano Ronaldo at club level at Juventus.
He is considered one of European’s most valuable football player and is the most expensive Juventus squad member from a transfer value perspective.
Paulo Dybala is commonly referred to as ‘La Joya’ (the Jewel) due to his creative style of play, talent and eye for a goal.