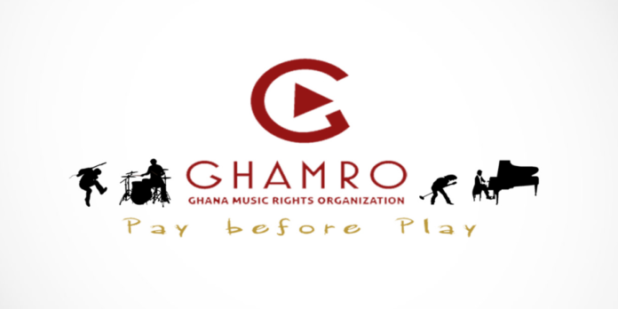 The Ghana Music Rights Organisation (GHAMRO) has issued a release to inform musicians that GH¢ 900,000 will be distributed to them starting Sunday June 30, 2019 as payment of music royalties.

In a statement signed by the Public Relations Head, Prince Tsegah,GHAMRO said musicians are entitled to their royalties and GHAMRO was doing so as the law dictates.

Mr Tsegah gave a detailed breakdown and indicated that that there had been immense increment in distribution numbers because “prudent investments were made by the Board and Management to augment the dwindling blank levy amount paid by the State to GHAMRO.”

BELOW IS THE FULL STATEMENT:

The Ghana Music Rights Organisation (GHAMRO) wishes to inform its esteemed members’ that an amount of Nine Hundred Thousand Ghana Cedis (Ghc 900,000.00) will be distributed starting from the Sunday June 30, 2019.

This is in accordance with regulation 29(1) of the L.I 1962 of the Copy right Law 2005 which states that “A society approved under these regulations may on behalf of its members take measures that the society considers appropriate for the collection of royalties and any payments to which members are entitled’’ and regulation 30 further instructs GHAMRO to pay royalties “promptly and in any case not later than 6 months.”

A summary of the breakdown of the earmarked amount of Ghc 900,000 is as follows

It is instructive to note that the distribution amount has increased by Ghc 200,000.00 (Two Hundred Thousand Ghana Cedis) as compared to the previous distribution last year.

These increments of royalties were due to the prudent investments made by the Board and Management to augment the dwindling Blank levy amount paid by the State to GHAMRO.

Right Owners shall receive payments via the usual channels such as Mobile Money Transfers, Bank Transfers and over the Counter payments (Cheque).

Members who have not updated their bank/payment details with GHAMRO should kindly come over to the office for prompt attention.

Check out the release below: 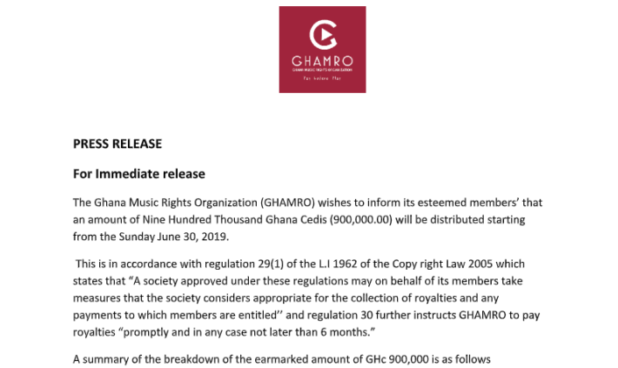