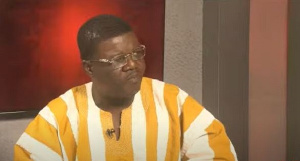 A walkout by the Majority on Friday, November 26, 2021, did not prevent the House from continuing with the business of the day.

Members on the majority side staged a walkout after a disagreement over a voice vote which did not go in their favour.

“Clearly, the No’s have it. The motion is accordingly lost”, the Speaker ruled as a last-minute request by the Finance Minister to meet with the leadership of the House was turned down by MPs after the Speaker of Parliament, Alban Bagbin announced that the ‘Nos’ had won the voice vote.

Reacting to this development, private legal practitioner, Ace ANN posted on his official Facebook page that “Parliament quorum is just 1/3 of members. But to take a decision, Parliament needs more than half of its members, which is now 138.

So the issue is at which point the [matter] was put to vote. At that point, there should be at least 138 members in the house.

But in responding to this assertion noted by Lawyer Ace Ankomah, the South Dayi MP, Rockson-Nelson Dafeamekpor, referred to Ace’s understanding as ridiculous, putting forward that parliament business of the day is more than a single decision.

“If Parliament is not already constituted to sit, how could they even arrive at a point where they need to make a decision? Parliamentary Business of the day is more than just a single decision. What a ridiculous understanding Ace has on this? Is Ace aware of Order 113 and 114?” Hon. Rockson wrote on his official Twitter page.

However, in a related development, the Majority Caucus in Parliament has asked Ghanaians to disregard reports concerning the rejection of the 2022 budget by Parliament.

According to the Majority, the action is illegal and must be treated with the contempt it deserves.

A statement from the Majority said: “For the record, the acts of the Minority and the decision of the Speaker to endorse it, constitute an unconstitutionality and an illegality and should be disregarded, as same is void and of no effect whatsoever”.

“We assure the good people of Ghana of our resolute willingness to ensure that the 1992 Constitution is respected to the latter by Speaker Bagbin and the Minority.”