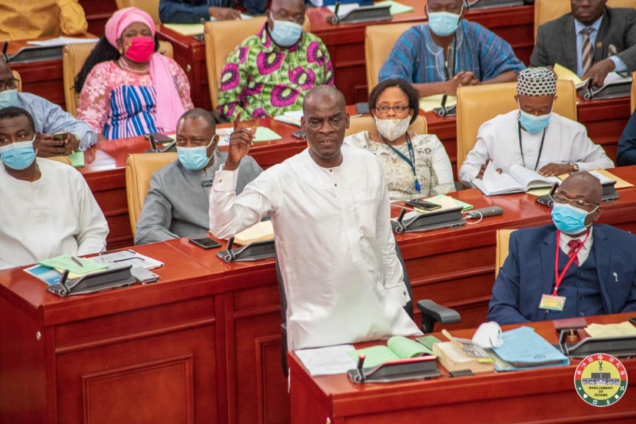 The Minority in Parliament has threatened not to support the approval of the 2023 budget if the sector ministers fail to appear before the House.

According to them, the absence of the ministers means they do not take the work of Parliament seriously.

The leader of the caucus, Haruna Iddrisu made this known on Thursday, on the floor of the House.

According to him, his side will not allow deputy ministers to move motions for approval of budget allocations.

“When we get to the approval of budget estimates and ministers don’t appear in Parliament by themselves, we will not support the approval of the budget allocations to those ministries.

“Ministers must take this House very seriously, and only ministers so appointed by the President to oversee the sectors of those ministries must rise from their seats to move motions to ask for budget allocations and approval by this House.

Failure to do so will mean that we will stand down a number of those motions,” he warned.

Mr Iddrisu added that his side will take their oversight duties seriously and hold the government accountable.

“We will hold this government accountable, and we intend to strengthen oversight, and it begins with this our decision.

If ministers don’t appear in person to move motions for budget allocations, then they should expect the fiercest resistance from this side of the House.”

On Wednesday, November 30, the ranking member of the Finance Committee of Parliament, Dr Casiel Ato Forson, criticised NPP MPs for abandoning government business and traveling to Qatar to watch the ongoing 2022 FIFA World-cup.

In a tweet, the Ajumako Enyan Essiam MP said their absence sends the wrong signals to Ghanaians.

“At a time of serious economic crisis, Cabinet Ministers and MPs should not abandon the important business of budget consideration to go and watch football in Qatar!

The optics are bad! We need to show we are serious about resolving the crisis!”

DISCLAIMER: The Views, Comments, Opinions, Contributions and Statements made by Readers and Contributors on this platform do not necessarily represent the views or policy of Multimedia Group Limited.
appear approve Budget ministers minority parliament sector 2022-12-01
admin
Share