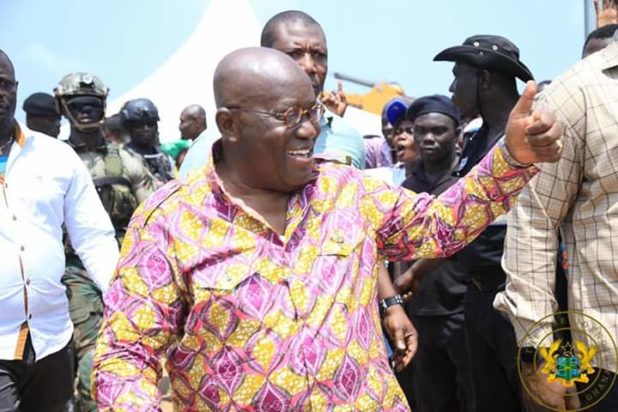 President Nana Akufo-Addo has urged the chiefs and people of Ajumako Enyam Essiam constituency in the Central Region to vote massively for the New Patriotic Party(NPP) administration come 2020 general elections.

According to him, voting against the former Deputy Finance Minister who’s the incumbent Member of Parliament for the area, Cassiel Ato Forson will be a reward for the great work that his government has done in the area.

“I want to take this opportunity to thank the people of Ajumako Enyam Essiam for voting massively for the NPP and myself in the 2016 election. You did so well, voting for the NPP in 19 of out 23 Parliamentary seats is very great and we are grateful for that”.

President Akufo Addo indicated that the John Mahama led government left him with empty confers necessitating that pragmatic measures be adopted to meet the needs of all Ghanaians and therefore craved for patience.

He added that the area will get its fair share of the IDIF as he is committed to job creation in the area especially when the IDIF initiative was first announced in the Ajumako Enyan Essiam District.