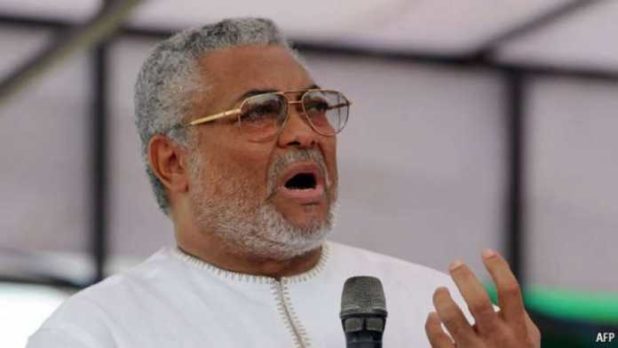 The Volta Regional Chairman of the NDC has in a statement refuted allegation of assault level against the NDC by its founder in a statement issued on Monday.

Former President Rawlings while condemning the violence which marred last Thursday’s by-election in Ayawaso West Wuogon also accused his party of internal violence in which he claimed one Edem Tekpli was maimed.

The former President noted that he had earlier visited the Medifem Hospital at Westlands to check on Edem Tekpli who was the victim of “our own internal violent machinery against the colleague of an aspiring parliamentarian.”

According to the Former President, Edem, was attacked at Ho at dawn on Thursday by unknown assailants who first slapped, hit, and stabbed him repeatedly.

Responding to the accusation, John Kwadwo Gyapong, said the former president’s account was factually inaccurate. He has, therefore, stated his version of events involving the said Edem Tekpli.

“1.          Mr. Tekpli stays in Ho and works in Dakpa in the Akatsi North district. According to his own narration of what happened to the people of Amule community in Akatsi North, he was attacked in Ho by some unknown assailants who tried to snatch his bag from him. He was slapped and stabbed when he refused to let go of the bag.

2.            Mr. Tekpli reported the case to the police in Ho and was sent for treatment at a hospital, also in Ho, where he was treated and discharged.

4.            Mr. Tekpli later travelled to Accra for a medical review at the request of a benefactor who is a potential parliamentary aspirant, and who sent a vehicle to pick him to Accra.

We must put on record that the entire Amule community is surprised to hear that the attack on Mr. Edem Tekpli has changed into a political matter contrary to what he told them.

“At no point has the police said the attack on him was from within his own party, hence we should not create that impression when there is none.

“The NDC Volta Chapter wishes to use this opportunity to empathise with Mr. Edem Tekpli and wish him a speedy recovery. It is our plea to all not to assign any unfounded reasoning to the attack on Mr. Tekpli as we all wait for the report from the Ghana Police Service.”