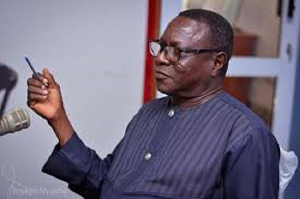 Former Information Minister John Tia has revealed why people in the Northern part of Ghana always vote for the National Democratic Congress (NDC).

According to him, the leader of the NPP in the 1992 election, Prof. Albert Adu Boahen denigrated the people from the North by saying that they needed to bring their strength so that the people from the South will use their brains to run the affairs of the country.

“I still remember at Plaza (now Jubilee Park), Prof. Adu Boahen came, what did he say? He said we in the North should add our strength to them, Southerners who have the brains so that they would kick out this man (Former President Rawlings). So we were just noted for our strength, not our brains, not our sense. So if you talk like that, what have you done? Where are you pushing us?

He continued “When he (Prof. Adu Boahen) went to Walewale, he said ‘what do you need electricity for? Kerosene is enough for you’. So these are things that made the North NDC”.

To him, the love and respect the late former President of Ghana showed to the people of the Northern part of the country is what has always been replicated in votes for the National Democratic Congress (NDC).

“It is not for nothing that the North went NDC and will forever be NDC. Rawlings had demonstrated that he was the people’s man. He was for everybody. If you know the state of the North before Rawlings, you would realize how much Rawlings had done for the North and for the ordinary person. So if you want to find out why the North is so much attached to the NDC, just trace to the developmental projects and policies he brought to the Northern people,” he added on Bolgatanga-based Dreamz Fm monitored by MyNewsGh.com.