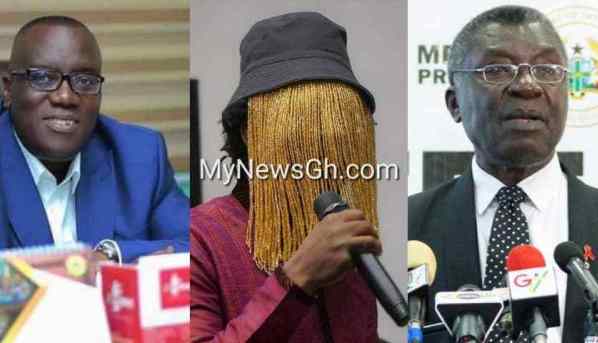 Chief Executive Officer (CEO) of the Forestry Commission, lawyer Kwadwo Owusu Afriyie popularly known as Sir John and the Minister of Environment, Science and Technology, Professor  Frimpong Boateng are alleged to have been caught pants in the second video of Anas Aremeyaw Anas on Galamsey fraud, MyNewsGh.com has filed.

The two top officials are part of high-ranking government officials caught pants down allegedly receiving bribes to facilitate illegal mining in forest areas at a time the Akufo-Addo government had placed a ban on galamsey.
It would be recalled that MyNewsGh.com reported of how the chiefs and people of Jacobu, a town in the Amansie West district announced that the issue of illegal mining in their district was spurred by members of the governing party.
The chiefs mentioned two powerful people in the New Patriotic Party (NPP) as some of the two behind the illegal mining or ‘galamsey’ business. They are Bernard Antwi Boasiako and Kwadwo Owusu Afriyie.
The chiefs made the allegation that Mr. Kwadwo Owusu Afriyie Sir John had given out a concession of the Aprampram Forest Reserve to a Chinese mining company. They believe that the process is being carried out under the guise of land reclamation.

The chiefs lamented that the fact the government’s anti-galamsey efforts are being undermined by its own people is an indictment on the President.
Undercover journalist, Anas Aremeyaw Anas, who is likely to release ‘Part 2’ of his documentary on illegal mining titled, “Galamsey Fraud” this week.
The documentary is aimed at naming and shaming selfish and powerful individuals, stabbing President Nana Akufo-Addo and Ghanaians in the back, in his relentless efforts at fighting against illegal mining popularly known as ‘galamsey’.
Sources close to the Tiger-Eye PI team, have hinted that the yet-to-be released documentary, is essentially focused on some top officials in government, including; ministers of State, politicians as well as security personnel.

These individuals, who are supposed to be seen helping the President win the fight against the dreaded illegal mining, were rather caught red-handed on secret video tapes, by the lenses of Anas and his crew, receiving bribes at the blind side of the President, to circumvent measures put in place to curb illegal mining and, allowing a company to mine.

Previous Ghana’s Economy will collapse on your heads – Oppong-Nkrumah to Minority
Next Kofi Nti, 7 others arrested for robbery at Prampram