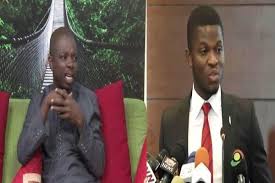 In recent times I have heard the National Communication Officer Of the NDC making air waves and chastising the government but I haven’t had the chance to closely monitor him.
However, today I have taken the pains to read a write up posted by one Sammy Gyamfi I will best describe as Nana Nkontompohene IIII on his Facebook timeline today the 13th day of November 2019, insinuating that Hon Ken Ofori Attah has lied again for stating in his Budget statement today that, Ghana did not import maize in 2019.

Sammy Gyamfi noted that, the assertions by the Minister for Finance is a clear deception.
He further made reference to the United States Department of Agriculture on Ghana’s Corns import report 2019 positing that the report depicts that, Ghana imported 50,000 tons of maize in 2019.

Setting the records straight, I would like to state unreservedly and categorically that, there is no where or nothing of that sort in the report quoted by Nana Nkontompohene IIII aka Sammy Gyami that Ghana imported 50,000 tons of maize in 2019.

I dare him to produce the report and the exact page that he made reference to alleging that Ghana imported 50,000 tons of maize and further calling the Finance minister a liar.

I will only pardon Nana Nkontompohene, if he is insufficiently acquainted with reading skills and understanding when he chanced the said report. I have also read both ,the Food and Agriculture Organization of the United Nations ( FAO) and United States Department of Agriculture Foreign Agricultural Services Reports 2019 and Ghana has not been listed among countries that import maize.
In fact, Ghana was lauded and praised in that report. The report stated clearly that, even though 50% of Ghana’s port charges have been waived to make businesses attractive , the country (Ghana) has not or did not import maize in 2019.

Sammy Gyamfi is a pathological liar. He must be watched closely. He has no facts all what he does is to lie and henceforth some of us are going to monitor him closely and expose him

Previous Listen: Why JUSAG is on strike; the inside story
Next Go back to work now – JUSAG ordered