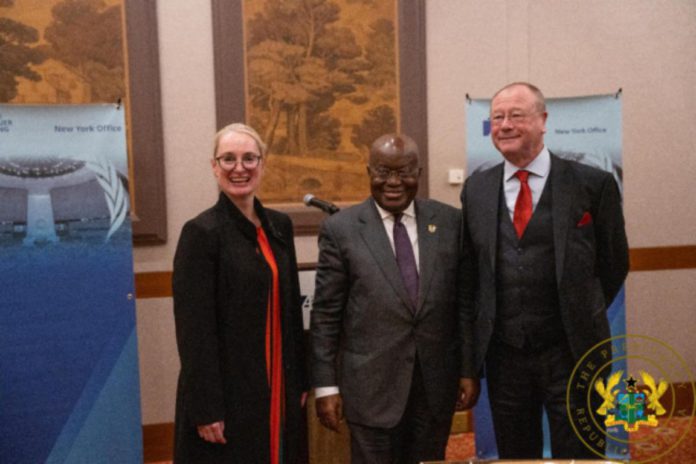 President Nana Akufo-Addo has once again called for the reformation of the Security Council of the United Nations, describing the current structure as an injustice against African countries.

Speaking at an event organised by the Konrad Adenauer Foundation, on Wednesday, 10th November 2022, in New York, President Akufo-Addo noted that the Security Council is constrained by its anachronistic structure and methods, which undermine efforts to tackle contemporary challenges in the most effective manner.

“The conversations around reforms, which have been going on for three decades without an end in sight, must, therefore, yield real changes to the structures of the Council to make it innovative in its approach,” he said.

According to the President, the current structure of the UN Security Council represents a long-standing injustice toward the countries of Africa, and the time is long overdue in addressing it.

“It is obvious that the contemporary world has moved on significantly from the post-1945 world, which gave rise to the birth of the United Nations and the structure of the Security Council. The world of 2022, and even less that of 2050, is not the world of 1945. The crisis of the multilateral financial institutions and the United Nations system, which were born from the rubble of the Second World War, is a deep crisis,” President Akufo-Addo said.

He continued, “It will continue until a fair system is put in place; a system that reflects the new balances, no longer based on who lost or won the Second World War, but on the major contemporary and future balances. These balances must take into account new realities such as demographic dynamics or access to resources, in a context of scarcity.”

In its current state, the President noted that the Security Council is finding it increasingly difficult to propagate the rule of law and democratic principles.

“The use of the veto as an instrument of great power and interest is denuding the Security Council of a great deal of legitimacy as the principal instrument for the maintenance of international peace and security. The African Common Position on UN Reform, based on the Ezulwini Consensus, is of even greater relevance today than it has ever been. It is essential that it be brought back to the centre of global discourse,” he stressed.

President Akufo-Addo was confident that it will only be through the reforms that are suggested in the African Common Position that will enable the Security Council to be effective in addressing the challenges of our time.

“And it is only through its effectiveness at maintaining international peace and security that the Council can remain credible, legitimate and relevant,” he added.