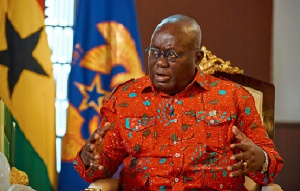 There is growing pressure on President Nana Addo Dankwa Akufo-Addo to come out and declare the position of his government on the highly polarized issue of Lesbians, Gays, Bisexual, Transgender and Queer (LGBTQ+) activities in Ghana.

The president has maintained a loud silence on the issue since it became subject of media discussions following the opening of LGBTQ+ office in the country.

Calls from religious bodies on the president to break his silence on the topic keep heightening each passing day. Some Civil Society Organizations and members of the opposition National Democratic Congress have also made similar calls.

Sheikh Aremeyaw Shaibu, the spokesperson for the National Chief Imam was one of the first few people to make such demands. He told Joy News that a comment from the president clarifying the position of his government will help put matters to rest.

“We still expect the government to come out with a clear position on this,” he said on JoyNews during a programme monitored by GhanaWeb.

“I will want to see the government come to state a clear position on that but the offices, in my view and speaking for all Muslims, must be closed immediately,” he said.

Archbishop Salifu Amoako, the founder of the Alive Chapel has also emphasized the need for the President to speak on the matter.

“I will plead with the President to as a matter of urgency come out and address the nation. The president can be said to be the physical and spiritual father of the nation.

“He must therefore speak for us to know his position. But for us the Ghana Prophetic and Charismatic Council we stand with our fellows, being the Presbyterian Church of Ghana, the Pentecostal Churches Council, and all the other religious groups to condemn in no uncertain terms the people trying to impose homosexuality on a country that has almost all of its population being religious,” he said.

Clement Apaak, a leading member of the NDC who accused the president of facilitating LGBTQ+ activities in the country, said that he can only purge himself of such accusations by coming out with an emphatic statement against the group.

“Ghanaians expect President Akufo-Addo to address them and to state clearly his position, what actions he intends to take to ensure that LGBTQI doesn’t find space in Ghana. The time for talk is over, it’s time for action” Apaak said.

What Akufo-Addo said about the topic in the past

This is not the first time Akufo-Addo is facing this topic in his capacity as a President of the Republic of Ghana.

In 2017, the president in an Aljazeera interview made a comment on this topic which to critics was a tacit endorsement of same-sex relations.

“I don’t believe that in Ghana so far, a sufficiently strong coalition has emerged which is having that impact on public opinion that will say change it, let’s then have a new paradigm in Ghana,” Akufo-Addo said in an interview on Al Jazeera’s Talk To Al Jazeera hosted by Jane Dutton in November 2017.

When asked whether he would support such a cause, he responded, “I think that it is something that is bound to happen”.