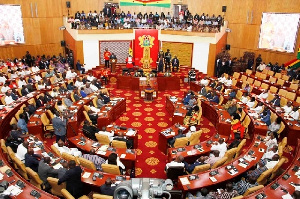 The Minority side of the eighth parliament of the Fourth Republic has voted to reject the 2022 Budget Statement and Economic Policy of the government, which was presented by the Minister for Finance, Ken Ofori-Atta, on the floor of the House on Wednesday 17 November 2021.

Before the rejection, the Minister for Finance appeared in the House with a prayer asking Parliament to suspend the approval process to give the executive an opportunity to engage the parliamentary leadership over the introduction of the electronic transactions levy (E-Levy) outlined in the 2022 Budget Statement.

After the Finance Minister made his prayer, the Speaker subjected it to a voice vote and ruled that those against the prayer had prevailed over those in favour of the prayer.

The Majority side, speaking through the Deputy Majority Leader, Alexander Afenyo- Markin, opposed the Speakers ruling and asked for the vote over the Finance Minister’s request to be taken again through the tallying process known as division.

Ahead of the “division”, the Minority side demanded that the Finance Minister – who is not a Member of Parliament but who has authority under the 1992 constitution to participate in parliamentary processes – step out of the chamber before the vote was carried out.

Upon the departure of the Finance Minister, the Majority side demanded that the general secretary of the National Democratic Congress, Johnson Aseidu Nketiah, who was seated in the Public Gallery of Parliament, should also leave the chamber before the vote was retaken.

The Majority side then staged a walkout after the NDC general secretary refused to leave the Public Gallery of the chamber.

After a short suspension of sitting, the Speaker resumed to continue with the business of the House without the Majority side.

Putting the question for approval of the 2022 Budget to a voice vote of the half-empty chamber, the Speaker ruled that: “Clearly, the No’s have it. The motion is accordingly lost.”

Meanwhile, the Speaker of Parliament, Alban Bagbin, chided the Minority Caucus for subjecting him to public ridicule by their actions and comments because he decided to delay the resumption of sitting today (26 November).

The Speaker suspended sitting for 30 minutes to allow the Majority members, who were in a caucus meeting, to return to the chamber of Parliament.

However, the House took more than two hours to resume sitting, which prompted the Minority members to chant, sing songs and heckle the House leadership.

Speaker Bagbin, clearly unhappy with the actions of the Minority, said he has his reputation to protect in serving the nation.

The Speaker said the delay had been caused by an audience he granted the Minister for Finance and leaders of both parties in Parliament as the House prepared to vote on the 2022 Budget.

“I’m saying that the suspension was for 30 minutes but it has taken us two hours or more to return, and that is because, the subject matter that we are to discuss, there’s been new development … and, as Speaker, I have to be briefed.

“So your leaders came with the Minister for Finance to brief me. Should I ignore them and come and preside because I’ve suspended sitting for 30 minutes?

“Go through the media and see how I’m being insulted. Please, the only thing I have is my reputation … Please let’s be honourable Members of Parliament,” the Speaker said.