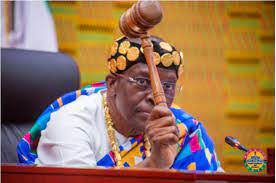 Parliament has approved the Budget Statement and Economic Policy for the 2023 fiscal year, after heated arguments from both sides of the House.

This comes barely 24 hours after the Minority caucus expressed their displeasure with parts of the budget presented on November 24, 2022.

Minority Leader, Haruna Iddrisu at a press conference on Monday stated that the Minority would resist the policies and economic statements that have been laid before Parliament.

Apart from the VAT, the Caucus also expressed worry over the review of the Electronic Transfer Levy (E-Levy).

They also kicked against other policies including the debt restructuring, treatment of bonds, financial allocations and economic policy measures.

Financing of the national cathedral was met with fierce resistance amidst calls on the government to reduce number of appointees and realign some ministries to check expenditures.

On the part of the Majority Leader, Osei-Kyei-Mensah-Bonsu he asserted that the challenges Ghana is faced with ought be admitted, adding it is a global crisis.

However, the government is leaving no stone unturned and has called for a collective effort.

Previous Minority kicks against debt restructuring programme
Next Road tolls: We will no longer be paying 50 pesewas and ₵1 – Roads Minister