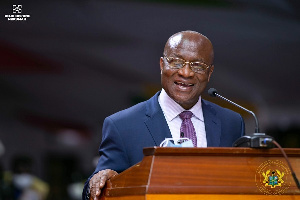 The Majority leader in Parliament has been severely lambasted by members of his own party; the New Patriotic Party (NPP) and Ghanaians at large for suggesting that it will be wrong for the party to choose an ‘Akan’ flagbearer in 2024.

A group calling itself ‘Concerned Northern Grassroot’ of the NPP has even called for his resignation.

The Member of Parliament (MP) for Suame constituency averted that it will be unwise for the NPP to choose an akan flagbearer again.

“Inwardly, I know I have the competence to lead the party but is it wise that after two Akans – former President Kufuor and current President Akufo-Addo – to present a flagbearer candidate with different ethnicity . . . I think it is not good for a party which has been accused by some as being overly Akanistic in nature. But not everybody would agree with me and that is the beauty of democracy,” he intimated.

However, speaking in an interview on Peace FM’s morning show ‘Kokrokoo’, the Majority leader denied claims that it will be unwise for an ‘Akan’ to be chosen again.

“Even though I believe I have the competence to contest, during serious introspection I believe the time is not right for me to say I can succeed a third succession Akan . . . I’ve not said anywhere that an Akan can not lead the party,” he said.

He further urged critics to go and listen to the interview he granted Joy FM.