The Paramount Chief of the Ejisu Traditional Area Oguakro Afrane Okese IV has apologized to MP and Deputy Minister for Roads and Highways, Kwabena Owusu Aduomi for calling him foolish.

Oguakro Afrane Okese IV made the comment when a contender and victor in the primaries, John Apontuah Kumah and his supporters thronged his palace after he was declared winner of the election on Saturday afternoon.

“I will only advise you to be careful and do only what the electorates want; it is true that parliamentarians do not construct roads and other projects, but you can lobby for them to be done if you set your mind to do it; unless you want to behave like that foolish Owusu Aduomi who did nothing for us”. The Chief was reported to have said.

Following immense pressure from supporters of the MP, the chief has been forced to take back his words and is pleading for mercy.

“I am writing this letter to express my sincerest apologies to you in reference to a speech I made when the newly elected New Patriotic Party (N P.P) parliamentary Candidate for Ejisu Constituency Lawyer John Kumah paid a courtesy call on me on Saturday, 20th June, 2020 at the Ejisu  Palace”, he said in a letter sighted by MyNewsGh.com.

He added” I genuinely feel very sorry and sad on my part as Omanhene of Ejisu Traditional Area to have made such a derogatory comment about you in my speech. I am even short of words to express to you how I feel for displaying such an act of disrespect towards you.

Traditionally, you are my son because you are royal to the Kyidom Stool and was only been strict on you for failing to heed to my advice over the years but that is no justification for such comment to have been made in public much more such an occasion.

I honestly and sincerely apologise to you, your able supporters and all and sundry for using such unprintable words on you. I ant sorry for what happened 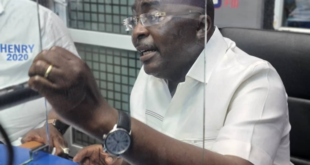 Govt has created 2 million jobs in the formal sector – Bawumia