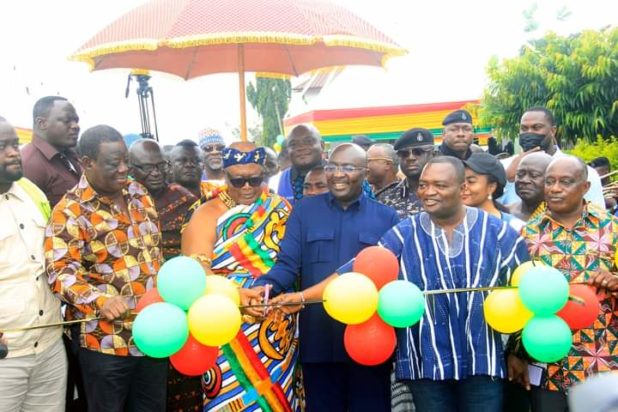 The Akufo-Addo led government has since 2017 completed 1,180kms of roads in the Ashanti Region. These involves 264kms of high way roads, 495kms of unban roads and 421kms of feeder roads. The revelation was made by the Vice President of the Republic of Ghana, H.E. Alhaji Dr. Mahamudu Bawumia during the inauguration of the Rehabilitated and Auxiliary Infrastructure of Kumasi inner ring and adjacent street projects on August 1, 2022 at Nsenie in the Oforikrom Municipality of the Ashanti region.

The project which was commenced on December 13, 2019 consist of a total of 100kms of roads across six (6) Assemblies within Greater Kumasi. These are Kumasi Metro, Asokwa Municipality, Suame Municipality, Kwadaso Municipality, New Tafo Municipality and Oforikrom Municipality. The Vice President commended the contarctors of the project, M/s Contracta Construction UK Ltd, for completing the project without any cost overrun

The Vice President indicated that, though the government has done well in delivering on road infrastructure for the people of Ashanti Region, there is more to be done particularly concerning roads in Kwabre East. He announced to the gathering that Parliament has meanwhile approved funding for the Suame interchange project, and it is expected to commence in September 2022.

The Ashanti Regional Minister, Hon. Simon Osei-Mensah indicated that, even though the government has done its best, it has not achieved the level of development in road infrastructure in the Ashanti Region it desires. This is partly due to the pandemic that has ‘caused serious financial constrains for which Ghana is no exception’. Reiterating the words of the President that ‘we don’t know how to bring back the dead, but we know how to bring back the economy’, the Regional Minister expressed the confidents that with a competent team led by the current President and assisted by the Vice President, Ghana will recover from the economic difficulties.

Expressing gratitude to the government for delivering on the 100 kms road project, Nana Mensa Bonsu, Asakyihene, the representative of Otumfour noted that there are more to be done. He indicated that the Ashanti Region is the bedrock of the current government as such ‘we demand the best’.