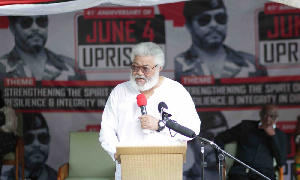 Former President of Ghana, Jerry John Rawlings has once again hit hard at Prof. Kwamena Ahwoi, asking him to desist from whitewashing his dirt and greed with the names of PV Obeng and Kojo Tsikata

Prof. Kwamena Ahwoi released his book that chronicles his working relationship with former President of Ghana Jerry John Rawlings and other former appointees under the erstwhile administration.

The book which has since its release generated controversies is titled “Working with Rawlings” addresses some backstories and dark sides of the Rawlings’ administration till he handed over power to the NPP government in 2000.

Prof. Ahwoi giving an indication of the close associates of Jerry John Rawlings while in power said “”I think that in the period of revolution it was captain Tsikata. They both have military background, they spoke the same language. I think that at a certain point, Rawlings look at Captain Tsikata because of his international exploits in Angola and other places”.

He added that in dealing with every aspect of the economy, Rawlings had a go to person he dealt with under his administration and these individuals were the ones controlling the affairs of government.

Reacting to some claims in a portion of the book and revelations in the book with regards to PV Obeng and Kojo Tsikata, the former President, Jerry John Rawlings asked Prof. Awhoi not to whitewash their dirt and greed with their names.

He said he was aware of the strengths and weaknesses of PV Obeng and Kojo Tsikata and therefore should not draw them into his vile agenda.

“I’m not unaware of PV and Kojo Tsikata’s strengths and weaknesses. Greed is not part of them. So please don’t whitewash your dirt and greed with their names.”