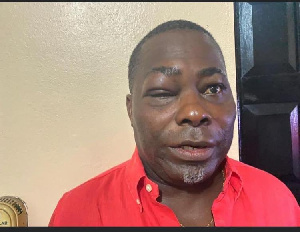 Disturbing photos of the New Patriotic Party (NPP) Regional Secretary for Western Region, Charles Bissue have emerged following widespread media reportage that he was involved in bloody confrontation and fight with the Member of Parliament for Tarkwa-Nsuem Constituency over the weekend.

The photos, one of which shows a bloodied Bissue, has one of his eyes almost shut from the alleged fight.

GhanaWeb is unable to independently confirm if the damage to Mr Bissue’s eye was caused by the MP himself or his security detail.

Yesterday, Tuesday, September 22, news broke that Charles Bissue had allegedly inflicted multiple wounds on the hand of George Mireku Duker who is the Member of Parliament for Tarkwa-Nsuem Constituency in the Western Region.

According to reports, the NPP Regional executives were meeting with all the party’s Parliamentary Candidates in the Region at Kingston Hotel in Takoradi when the incident happened.

It is gathered that there was a misunderstanding between the MP and the Regional party executive, but the latter in the raging confusion grabbed the MP’s hand and gave him multiple bites which left him bleeding profusely.

Sources indicated that the MP, George Mireku Duker and Charles have not been in good terms because the latter is supporting an independent candidate against the incumbent.

It is unclear what exactly triggered biting but party executives have been tight-lipped over the development as they refused to either confirm or deny if indeed this took place.

According to MyNewsGh.com the MP, George Mireku Duker, confirmed the incident and said he had visited the hospital for treatment but declined to give further details.

“I have gone to the hospital and received treatment and I am getting well,” he revealed.

Attepmts by GhanaWeb to reach Charles Bissue for his version of events have so far proved futile.