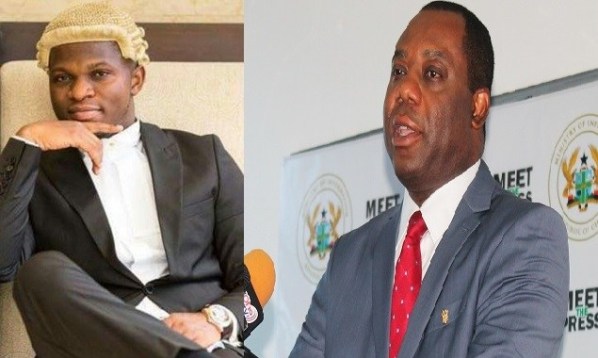 Minister of Education, Dr Mathew Opoku Prempeh has been directed by an Accra High Court to use substituted service to serve ‘runaway’ Sammy Gyamfi, National Communications Officer of the National Democratic Congress (NDC) in a GH¢1 million defamation suit .

The High Court presided over by His Lordship Justice Kweku T. Ackah-Boafo on Thursday 11th of July, 2019, made an order for substituted service of the Writ of Summons and Statement of Claim issued by plaintiff who is also a Member of Parliament (MP) for Manhyia South, against Sammy Gyamfi

The application for substituted service became necessary since the Defendant had constantly evaded service of the Writ of Summons and Statement of Claim, filed as far back as 25th June, 2019.

The learned judge ordered that the Writ of Summons and Statement of Claim be served on the Defendant, Sammy Gyamfi, by a publication in the Daily Graphic and also by posting a copy of the processes on the Notice Board of the High Court.

Dr Opoku Prempah is asking the court to, among other things, award GH¢1,000,000 in damages against Mr Gyamfi for widely circulating in the media that Mr Seidu Mba, one of the suspects arrested in connection with the kidnapping of two Canadian girls in Kumasi was the Manhyia North MP’s errand boy.

Dr Opoku Prempeh also prayed the court to compel Mr Gyamfi to render an unqualified apology to him in seven days after the judgment.

In his statement of claim, he is seeking: “A declaration that the words complained of and published by the Defendant and contained in paragraph 14 herein, are defamatory of the Plaintiff’s character.

“An order of the honourable court directed at the defendant to publish an unqualified retraction and an apology with the same prominence of the defamatory words received within 7 days after the judgment.

“An order of the honourable court for a perpetual injunction restraining the defendant, his agents, assigns, servants and any person claiming authority from the defendant from further making/or publishing any defamatory words against the Plaintiff.