The National Democratic Congress’ press conference to address the shooting incident in the Ayawaso West Wuogon Constituency, has turned chaotic, as party members besieged the hall where the address by the party Chairman was being held, disrupting the presser in the process. 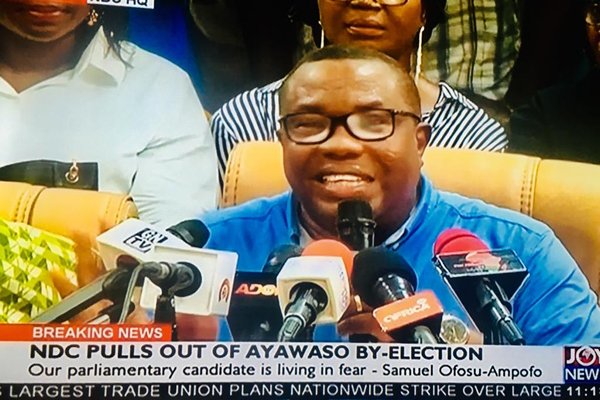 Some party faithfuls could be seen shouting, heckling and shoving each other in an attempt to get their views across on their stance on the by-election.
The NDC Chairman, Samuel Ofosu Ampofo, who had a hard time putting across his message, confirmed the NDC’s withdrawal from the on-going Ayawaso West Wuogon Constituency by-election, citing physical attacks and gunshot wounds on NDC members at the Bawaleshie polling center.
According to him, the residence of their parliamentary candidate was besieged by unknown people as though he was under house arrest.
He also disclosed that the Deputy National Youth Organizer of the NDC, Edem Agbana, was also attacked at the Legon Hall inside the University of Ghana by thugs affiliated to the NPP.
Speaking at the NDC headquarters, Mr. Samuel Ofosu Ampofo displayed ak-47 and pistol bullets, claiming they were evidence of the attacks on the NDC members.
Mr. Samuel Ofosu Ampofo, who was surrounded by party executives and sympathizers, explained that the party took the decision to withdraw from the by-election because they were not guaranteed of the safety of their polling station executives and party sympathizers who are observing the elections.
He also described today’s by-election at Ayawaso as a sad day for the country’s democracy.
He also called on the Chief of Defense Staff of the Ghana Armed Forces, as a matter of urgency restore sanity to the chaotic scenes happening in the Ayawaso West Wuogon constituency.
“Let me indicate that, our parliamentary candidate’s house was besieged, there was serious firing and as a result, six people were seriously injured. I personally together with the regional chairman and four members of the National executive committee visited the Legon Hospital, and two of our people were in very critical conditions, and if you see the way blood was oozing at the hospital… you would be amazed that this is happening in Ghana”.

“Together with myself and others, we visited the house of our parliamentary candidate, and I must tell you that, it took us a hell of time before we could even go in. The parliamentary candidate was almost under house arrest… As I speak he has not been able to step out. We consulted with him, and he said I  don’t want innocent people to shed blood and lose their lives because of this by-election.”
“We had no other option than to recall our party agents from the various polling centers, because we cannot guarantee their security”.
Ayawaso by-election: Gunshots fired at La Bawaleshie Presby polling station
Some persons have been arrested by police following a shooting incident a polling centre a La Bawaleshie during the ongoing Ayawaso West Wuogon Constituency by-election.
There are unconfirmed reports that two persons were shot during the incident, with took place at the La Bawaleshie Presby School, which has two polling centres.

Citi News’ Eugenia Tenkorang who was at the polling station described the area as chaotic with people throwing stones and firing gunshots.

Some men in black, with their faces covered and dressed in an intimidating manner, were also sighted on the scene.
She spoke to a man whose hands were covered in blood who claimed two persons had been shot.
He said one person had been shot in the arm and the other in the leg. Eugenia Tenkorang also said she saw a man who appeared to be injured being carried by another person.
–
By: Citinewsroom.com | Ghana |