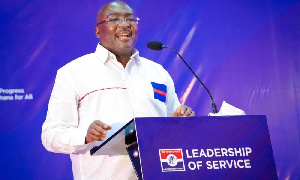 He disclosed on Accra-based Pace Fm that the consistency in his choice by Akufo-Addo is as a result of the trust he has in him which is why he is partnering him for the 2020 polls.

“Four times as running mate to Akufo-Addo is the doing of God and the consistency is as a result of the confidence in me by my boss President Nana Addo Dankwa Akufo-Addo. I wish to thank God and thank him for this honour”, he revealed on the show.

This is the fourth time he will partner President Akufo Addo in leading the governing New Patriotic Party (NPP) into another round of election.

It would be recalled that at a special National Council meeting of the party held at the Alisa hotel in Accra in June this year, President Nana Addo Dankwa Akufo-Addo was acclaimed by the council on behalf of the party as its presidential candidate for the 2020 elections.

Nana Akufo-Addo was the sole aspirant who filed his nomination to contest in the 2020 presidential primaries of the party.

Shortly after his acclamation, the President named his Vice as his running mate moving into the next election. A decision that has been widely expected and accepted by the party.

Dr. Bawumia in an address at the event said “He (Candidate Akufo-Addo) could have easily dropped me in 2012 and 2016 but he stuck with me and I am so honoured that he did and so eternally grateful. I would never take the trust and loyalty he has reposed in me for granted and will continue to do everything in my capacity to support him in the execution of his mandate as President. Sir, it has been a privilege working for you all these years and I thank you for giving me the opportunity. God Bless you.”

He added that “The best running mate in the world will not make a difference if the President is indecisive or incompetent.”