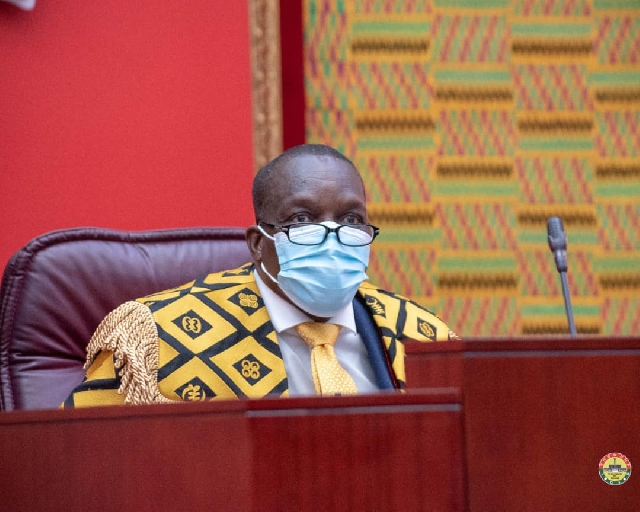 If Members of Parliament who have tested positive to COVID-19 do not stop going to the lawmaking chamber forthwith, their names would be published to warn others of their status, Speaker of Parliament Alban Bagbin has warned Ghanaian lawmakers.

His First Deputy, Joe Osei-Owusu, conveyed the warning on Wednesday, 3 February 2020 in the chamber.

“Mr Speaker wishes me to draw the attention of the members of the house that some MPs who have, in fact, tested positive, to the COVID, are still coming to the chamber”, he said, adding: “Mr Speaker wishes me to inform that if those members do not withdraw and isolate, he’ll be forced to publish their names of members who have tested positive in order to warn the rest of us”.

The Bekwai MP then said: “Please, let’s take this protocol seriously and let all members who have been informed of their test results that they have tested positive withdraw from the precincts of Parliament, not just the chamber; stay home and self-isolate, go through the protocols and recover before they return to the house”.

According to him, about 50 MPs have still not availed themselves of the test despite Parliament having made preparations for that.

He urged all MPs who have not taken the test to do so.

Ghana is currently experiencing a second wave of the pandemic.

At a press briefing organised by Information Minister-designate Kojo Oppong Nkrumah in Accra on Tuesday, 2 February 2021, the Director-General of the Ghana Health Service, Dr Patrick Kuma-Aboagye, said as of 30 January 2021, 67,782 cases had been detected through 783,432 tests representing 24,917 tests per million with a cumulative positivity rate of 8.7 per cent.

Dr Kuma-Aboagye said although 243 districts in the 16 regions of Ghana have recorded cases, ten regions did not register an increase.

Averagely, he noted, 700 cases are being reported daily with the Greater Accra Region still being the epicentre.

Cases in the Greater Accra Region are mainly located in the Accra Metropolitan area and its adjoining districts.

There is also an increasing number of workplace outbreaks, he noted, adding that the positive cases of international travellers have declined.

He also observed that there is an appreciable usage of face masks in the Greater Accra Region over the past one week.

Ashanti Region – 97 in 13 districts with Oforikrom recording the highest

Limited outbreaks have been reported in Senior Secondary Schools in the Upper West, Western and Greater Accra regions.

•       34 contacts screened in the Upper West SHS schools yielded one additional positive case. Thus, a school has 3 active cases and the second has 1

•       78% of the people observed had an intension to use the facemask, out of which 42% wore the facemask correctly.

•       The proportion of people who were correctly wearing the facemask were slightly higher among males (43.1%) than females (41.3%)

•       The proportion of people who were correctly wearing the facemask were slightly higher among children (43.5%) than for adults (42.0%)

•       Ayawaso West District registered the highest proportions of people who were wearing the facemask correctly (57.3%)

•       Ga West District registered the lowest proportions of people who were wearing the facemask correctly (29.1%)

•       The top 3 communities/locations that had the highest proportions of people wearing the facemask correctly were:

•       The top 3 communities/locations that had the highest proportions of people NOT wearing the facemask correctly were: