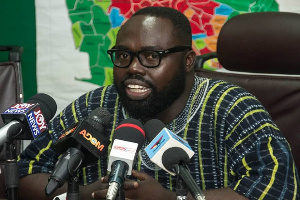 Peter Boamah Otokunor, the Deputy General Secretary of the National Democratic Congress has opined that the nine-page statement issued by President Nana Addo Dankwa Akufo-Addo as a response to claims by Martin Amidu in his resignation letter is ‘hollow and lacked facts”.

According to Otokunor, the President failed to effectively address the concerns raised by Martin Amidu and rather resorted to speculations and conjectures.

He alleged that in the history of this country, never has there been a government so interested in fleecing and exploiting the country than the Akufo-Addo government.

He mentioned in a GhanaWeb interview that the resignation of Martin Amidu captures perfectly the deep-rooted corruption being perpetuated by President Akufo-Addo and his appointees.

“The response was very weak, very empty, and lacked fact. It is full of congestions. I think the government will need to take this matter more seriously. The resignation of Martin Amidu tells the entire story of corruption in this government. It tells you that the government is leading the charge in the perpetuation of corruption” he said.

On Amidu’s resignation, Otokunor believes it is a vindication of the NDC’s stance that President Akufo-Addo has no interest in dealing with graft in the public space.

He disclosed that due to his involvement in the corruption, Nana Akufo-Addo is unable to whip his appointees in line.

“I think that it is good riddance. We have made this point very clear time without that number, that President Akuf-Addo cannot profess to be committed to the fight against corruption, especially when he has an enviable title as being a corruption clearing agent. Ghana has never seen a President who is engrossed in daylight thievery and corruption activities activity in broad daylight,” he told GhanaWeb.

He appealed to Ghanaians to save the future of the country by voting for the NDC in the upcoming elections.

He insisted that a future NDC government will not tolerate corruption and ensure the independence of the Special Prosecutor.