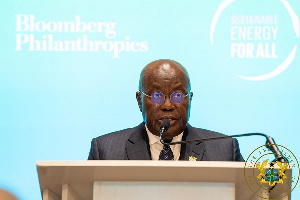 According to the Minority Leader in Parliament, they wonder why President Akufo-Addo who led Kumepreko demonstration in 1995 to protest against economic hardship now burdens Ghanaians with new taxes.

He stressed that the 2.5% increment in VAT will automatically cause a hike in the price of goods and services on the market.

This, he said, will heap more hardship on Ghanaians amidst the economic downturn.

Addressing journalists on Monday, December 5, 2022, Haruna Iddrisu said, ” whilst whittling away the little we have as a country in this intransigent manner, the Akufo-Addo/Bawumia government has decided to pile more hardships on the people of Ghana through the introduction of more taxes in the 2023 Budget presented to Parliament. What moral right does President Akufo-Addo have to increase VAT by 2.5% when he led the “KUMI PREKO” demonstration in 1995 resulting in the loss of five lives?”

“As sure as night follows day, this will worsen the hardship faced by Ghanaians, as the prices of almost all items will increase instantaneously once this tax comes into effect,” he added.

Haruna Iddrisu further said the Minority in Parliament have detected 22 additional tax and revenue measures in the 2023 budget read in parliament by the Minister of Finance, Ken Ofori-Atta.

The additional taxes, he bemoaned, will make life more unbearable for Ghanaians.

“At a time when people are facing the worst economic crisis and hardships in their lifetime, the last thing that is desired is further taxation,” he said.

Government, on Thursday, November 24, 2022, announced an increment in Value Added Tax (VAT) by 2.5 percent for consumers of goods and services.

The move, according to government is expected to improve its domestic revenue measures while seeking to reach an IMF deal to restore macroeconomic stability.