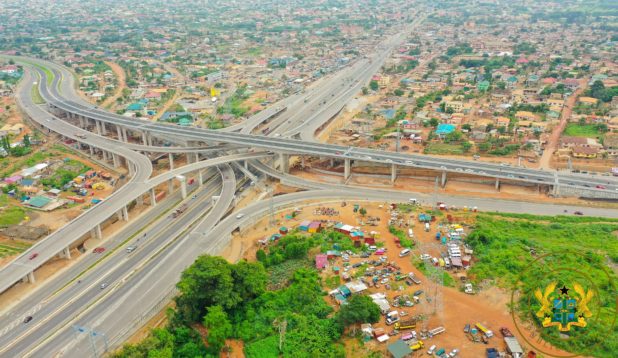 • It becomes the largest interchange in West Africa

• The interchange like many huge projects, have many facts, and here are 8 of them

The Pokuase Interchange, one that has been described by the president, Nana Addo Dankwa Akufo-Addo, as an interchange “never seen before in Ghana,” is not just another majestic edifice beautifying the skylines of Accra.

In fact, having been completed, this interchange becomes the largest interchange in West Africa.

Since the start of its construction, the project has been always been projected to be one of the biggest in the country and as it is commissioned today, Friday, July 9, 2021, we bring back some interesting facts about this project, to you.

In 2016, the government of Ghana, under the leadership of John Dramani Mahama, signed a loan agreement with the African Development Bank to provide $83 million for the construction of the four-tier Pokuase Interchange.

The agreement included that the government would provide $11 million of that money, to complete the project at a total $94 million.

In July 2018, the government, under Nana Addo Dankwa Akufo-Addo, cut the sod for the commencement of work on the interchange.

The construction which was expected to be completed in 2020 was to include about 5 flyovers linking all major roads, and also see the construction of a 10-kilometer length of the roads network.

At a ceremony to cut the sod for the official commencement of the project, then Senior Minister, Yaw Osafo Maafo, who was there to represent the president and read out his speech, pledged the government’s commitment to improving the roads network in the country.

He commended the previous John Dramani Mahama-led government for beginning the processes to get the contract approved and funded by the African Development Bank.

He disclosed to the Ghanaian Times in early 2021 that the project was at 91.8 percent.

He said the bridges linking Accra to Kwabenya, Awoshie, Kumasi, and Pokuase had been completed and opened to traffic.

He added that work on the bridge connecting Kwabenya to Kumasi was ongoing and would be completed by the first week in March this year.

The total cost of the project from its initial construction was to be at $94 million.

It was supposed to be split between the government of Ghana, and the African Development Bank.

The AfDB gave a total of $83 million, while the Ghana government took care of the remaining $11 million.

At the commissioning of the project, however, the project was said to have been completed at $74 million, according to Kwabena Bempong.

Agitation from staff on the project

On Thursday, October 22, 2020, construction workers on the Pokuase Interchange demonstrated what they labeled as maltreatment from their superiors.

These workers told GhanaWeb they were unhappy with the GH¢20 they received as their daily wages and GH¢1 allowance they received for scaffolding.

Out of the meager amount they received, they complained that there were also taxed from it.

Also, anyone who took a break while at post got a lesser amount as the 1-hour break was also deducted from the GH¢20 they received.

They also bemoaned the unavailability of health insurance cover on them despite how risky their job was.

These demonstrators told GhanaWeb that failure for government to intervene in their situation would lead to a roadblock, threatening that it could be extended to 2 months.

Places it is connecting

Another beauty about this four-tier interchange is that it connects quite a number of major locations in and around the Greater Accra region.

The largest interchange in West Africa is expected to improve mobility on the Accra-Nsawam section of the Accra-Kumasi Highway, reduce the incidence of road crashes at ACP Junction, and enhance sustainable economic growth for the people in the area, as well as facilitate traffic between the Tema-Ouagadougou-Bamako corridors.

It will also ease traffic to the Sahelian countries such as Mali, Niger, and Burkina Faso.

What president said at sod-cutting

In his speech, the president noted that the project will ease traffic, improve urban mobility, which, in turn, will benefit students, the community, and the growing industrial base located within the project zone.

“We are about to cut the sod for perhaps one of the most important interchanges in this country. The increase in Vehicular population over the last decade in Ghana has resulted in a very serious traffic situation for the whole nation and it is becoming unbearable in the Greater Accra Region. Engineers are therefore looking for many other ways to reduce this congestion. Towards the agenda for creating equal opportunities for all, in our framework of thinking Ghana beyond aid, it is imperative for us to have resilient cities with enhanced quality of living which is supported by very smooth intra and inter transportation” Osafo Maafo stressed while reading the speech.

The Pokuase Interchange is the first four-tier project to be undertaken in Ghana, as well as the largest in the West African region.

It is larger than the $320.2 million Kwame Nkrumah Circle Interchange, which was completed by John Dramani Mahama, which was jointly financed by the Brazilian government and the government of Ghana.

Other large interchanges in Ghana have been the first phase $160 million Kasoa Interchange, in the Central region.