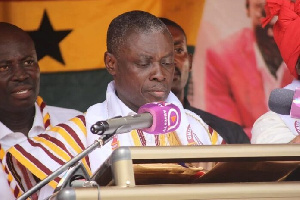 The Paramount Chief of Edina (Elmina) in the Central Region, Nana Kojo Kondua XI has banned the Flagbearer of the Ghana Union Movement(GUM) Rev. Christian Kwabena Andrews, a.k.a Osofo Kyiri Abosom from campaigning in his (Chiefs) jurisdiction.

This decision comes after Osofo Kyiri Abosom who says he has a divine direction from the Almighty God to destroy lesser gods across the country, reportedly broke one of Elmina’s gods into pieces and set fire to it at a time the chief had travelled.

He noted that although he reported the incident to the Police, the law enforcement agency has failed to take action claiming they are unable to deal with spiritual matters.

Nana Kojo Kondua XI has, therefore, vowed to ensure that Osofo Kyiri Abosom who is lacing his boots to contest in the upcoming general election never comes to Elmina to campaign for votes.

“Yesterday, I called the IGP and informed him to speak to Osofo Kyiri Abosom not to come to my town. He has been spoken to but he insists he’s fearless and will come no matter threats issued. Since he’s adamant and wants to come I’m begging Osofo Kyiri Abosom to tell the police that if he visits the area and something happens to him, no one should be arrested or held responsible then he’s free to come to my area. I hear him running his mouth but I want to tell him that it is not everywhere that he can go and boast and throw his weight about. Edina will deal ruthlessly with him when he steps foot in that area.”

Meanwhile, Osofo Kyiri Abosom responding to the threats said though nobody can restrict his movement in Ghana, he will take precautions.

“Once the Chief has publicly issued this warning to me I’ve to protect myself from any attacks. If it means that when I decide to go there I’ll have to inform my party members in Elmina to meet me at the outskirt of the town, I’ll do just that. I’ll not go to the town for somebody to beat me up.”

by;brightwebtv/nana asare barimah On the back of Captain Smart’s alleged removal on air over …