The decision by Reverend Isaac Owusu Bempah, Founder and leader of the Glorious Word and Power Ministry International to apologise to the National Chief Imam, Sheikh Dr. Osmanu Nuhu Sharubutu following his death prophecies on 31st December watch night service has not gone down well with his colleagues in the ministry. 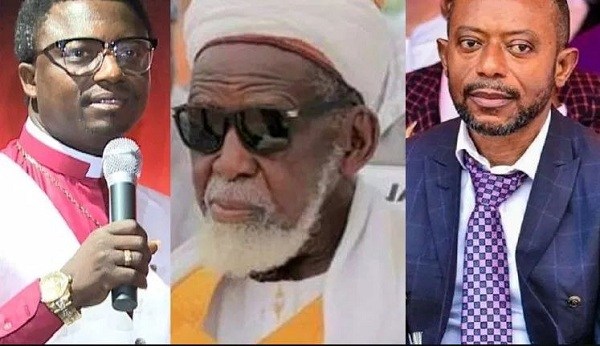 A video obtained by MyNewsGh.com from Kumasi-based televangelist and founder of the Ebenezer Miracle Worship Centre Ebenezer Adarkwah Yiadom, he is seen castigating his colleague for backing down on his prophesy wondering if indeed it was from God in the first place.

According to him, the world over and since the inception of Christianity, no prophet irrespective of the circumstance apologized for a prophesy if what the person who is a vessel used by God is telling his congregation what has been communicated to him

“Where have you heard that God has given you prophesy and after you have the delivered it and the consequences thereof you go and beg? The foolishness in Ghana is just becoming too much…I am not afraid of anyone. You go and make a prophesy and go and beg what kind of practice is that? You have disgraced Christianity for going to apologise with a bull and sheep”, lashed.

Founder and leader of the True Word Prophetic Ministry International, Prophet Nigel Gaisie also sought to make a similar prophecy by suggesting that Dr Bawumia might lose life in 2019 if prayers are not administered to avert the doom ahead.

Owusu Bempah later incurred the wrath of some Zongo youth who went on rampage at his Odorkor branch of his Church, vandalized billboards and other properties a move that was vehemently criticized by the Muslim leader.

In the ensuing days he went and apologized to the National Chief Imam as part of a reconciliation process but Ebenezer Adarkwah Yiadom describes his apology as unbiblical and a slap in the face of Christianity if his prophecies were truly from God.