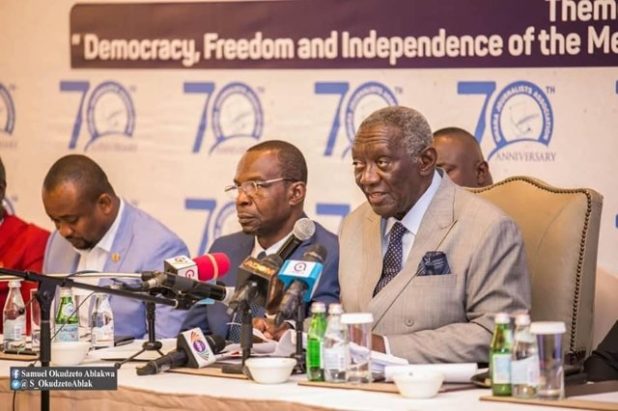 Former President John Agyekum Kufuor has charged journalists not to misconstrue the prevailing favourable media environment as unfettered freedom to upset the governance process.
He said despite being considered the ‘Fourth Estate of the Realm’, media practitioners should wield their powers responsibly.
The former President wants journalists to “acknowledge that this power has been earned from the increasing trust the people’s representatives in both the Legislature and the Executive are gaining in you.”
Speaking at the launch of the 70th Anniversary of Ghana Journalists Association (GJA) at Kempinski in Accra, Tuesday, he said the Association must “ensure that no one within the profession takes anything for granted to endanger and subvert the fine balance enacted by the Law.”

Mr Kufuor said those in the inky fraternity should always remember that the abuse of the immense power of the press led to the Rwandan genocide which claimed almost a million lives in 1994.

“This harrowing history on our continent entrenches the responsibilities of your profession. The GJA must monitor its members to ensure that the rights of individuals and government are not unduly violated. Your Association should be able to pull up its members who flout your ethics and rules, for necessary discipline,” the former leader said.
Touching on the subject of corruption, he said the fight is still a work in progress, and more needs to be done to fight malfeasance in society.

He expects the media to play its role as watchdogs of society, to give fair and accurate reports when dealing with corrupt public officials
“You must do your jobs on this score without fear, favour, or partisanship,” he said.

Mr Kufuor entreated journalists to be bold and humble enough to accept their shortcomings and apologise for misreporting if during their duties they get something wrong.
“May you, journalists of today, resolve to conduct yourself so honourably that the toil of yourselves and your forebears would not have been in vain.

“You should contribute to building a society of enlightenment where democracy reigns as people feel free to think and to express themselves without fear of impunity, and where checks and balances between the governors and the governed, and among the estates of government are guaranteed,” he said.
Regarding the current global phenomenon of fake news and reporting that is amplified by social media, the former president sees it as a serious challenge to the journalism profession.
“Your association should engage itself to counteract and sieve out such tendencies and their operators,” he suggested.
Commenting on the killing of Ahmed Hussein-Suale of Tiger-Eye, he said it is a testament “that there are still dangers lurking against your profession. The forces of darkness will try to continue to resist you for as long as you dare to shine a light on their nefarious, diabolical, and nation-wrecking activities.”
He, however, encourages media practitioners to dare “for yours is a mission to contribute to enhancing democracy, freedom and good governance for all our people! As daylight overcomes darkness, so would your genuine truth-seeking endeavours triumph over evil.”