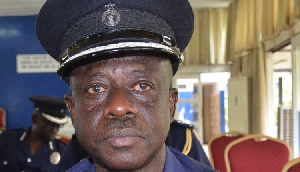 The Ashanti Regional Police Commander, COP Kwesi Ampofo Duku faces legal action over the seizure of a truck of rosewood and the illegal detention of the driver of the truck belonging to Empasteele Company Limited.

He together with the Inspector General of Police and the Attorney General have been sued in the sum of $40,000 by the company over the conduct of the former.

Lawyers for according to a document sighted by MyNewsGh.com are seeking a declaration that the actions of the Plaintiffs against the defendants herein from the 28th June 2019 were unlawful.

According to the facts of the case, in June 29, 2019, their Truck with registration number BA 1390 Y, containing lawfully acquired Auctioned Rosewood, from the Forestry Commission and being accompanied by all the relevant documents from Walewale to Tema for export in fulfillment of Contractual obligations but was impounded initially by the Mampong Divisional Police who after all checks for an entire day indicated their satisfaction with the consignment and issued a covering letter to that effect

Shortly after their encounter with the Mampong Police, the vehicle it is gathered was stopped at Asonomaso Junction by a Police Patrol team who demanded to see their documents which they readily produced, together with the covering note from the Mampong Police, who had initially satisfied themselves of the legality of our transport of the two containers of Rosewood.

Lawyers of the company aver “Our client informs us in addition that they at all times indicated to the Police that they had a contractual obligation to deliver the said goods which said obligation was time bound and risked been frustrated by the Police, by their actions

Our client, however, informs us that the said Police Patrol team ignored the documents they produced, disrupted their journey without any basis and proceeded to detain the driver of the vehicle which detention has been ongoing since the 1st of July 2019. Our client informs us that the vehicle containing the goods although being a perfectly lawful endeavour has as a result of the aforementioned acts not been transported to Tema for delivery, and remains by the roadside with the driver languishing in detention, to the buyer as scheduled, a development which has caused the buyer of the products to renege on the contractual agreement resulting in clear financial loss and embarrassment to our client”. 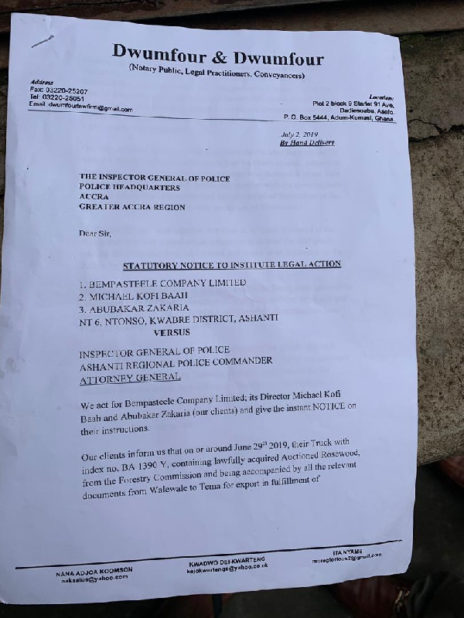