Organised Labour to embark on indefinite strike on this date… 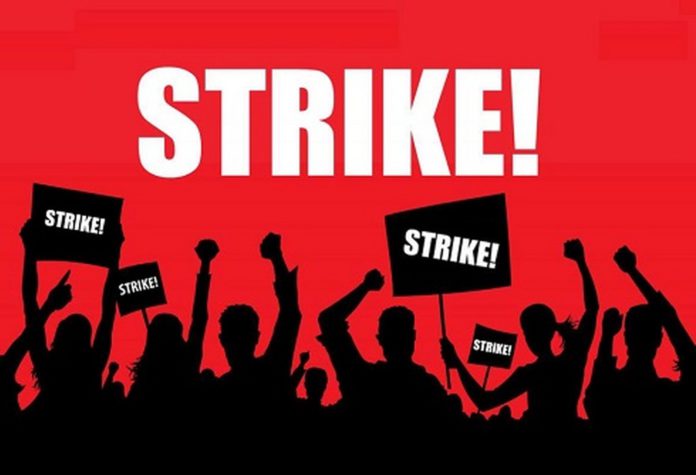 Organised Labour has declared its intention to embark on an indefinite strike from December 27, 2022.

This was made known by the Secretary General of the Trades Union Congress (TUC), Dr Yaw Baah, during a press briefing on Monday.

He explained that the strike is due to government’s decision to introduce a debt exchange programme.

According to him, the strike will be in force until the government exempts pension funds from the planned debt exchange programme.

TUC had earlier cautioned government to exempt its members’ pension funds from the debt exchange programme.

According to them, the programme will negatively affect the security of their retirement income.

“…we have analysed the debt exchange programme and after a thorough analysis of the programme and a very extensive discussion among the leadership of TUC and affiliates, our conclusion is very firm. And it is that the programme will negatively affect the pension funds of our members and consequently their retirement income security,” he said.

“Already, pension is low and we would have thought that our government will do everything to protect the small pension we have. Instead, they are introducing programme inspired by the International Monetary Fund to cut further pension income. Therefore, the Trades Union Congress and all its affiliates have decided that the pension funds of our members will not be part of the domestic debt exchange programme,” he added.

Dr Baah further stated that, the Union has written to the Minister of Finance, demanding that all pension funds invested in government bonds should be removed from the domestic exchange programme.

“…we are also demanding in that letter that within one week from today, the government should publicly announce that all pension funds, including SSNIT are exempted from the debt exchange programme. Again, in the letter, we have served notice that if government fails to accede to our demands within one week, we will advise ourselves,” Dr Baah said.

It would be recalled that government on December 5, 2022, announced a debt restructuring measure.

According to Ken Ofori-Atta, the objective is “to invite holders of domestic debt to voluntarily exchange approximately GH¢137 billion of the domestic notes and bonds of the Republic, including E.S.L.A. and Daakye bonds, for a package of New Bonds to be issued by the Republic.”

Bondholders like pension funds, banks and insurance firms will have to exchange their bonds for one that will earn zero interest next year.

The new bonds will only begin to earn five per cent interest in 2024 and 10 per cent for the remainder of their tenure. The maturity dates have also been extended with the first bonds only maturing in 2027.