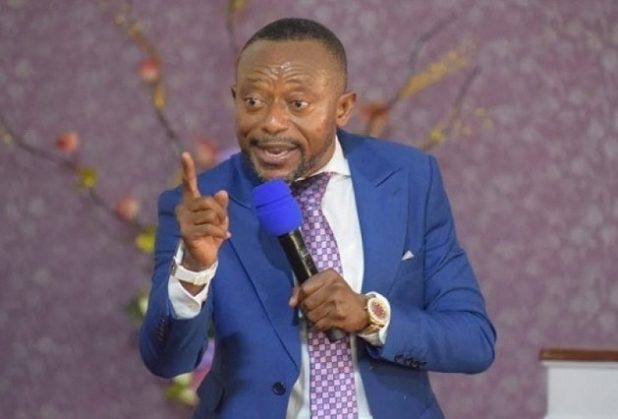 The Founder and Leader of Glorious Word Power Ministry International Reverend Isaac Owusu Bempah has threatened to turn Chief, a junior pastor of Prophet Ebenezer Adarkwa Yiadom popularly known as Prophet 1 into a mentally deranged person where he will eat sand from the ground.

He further warned that Pastor Chief will be reduced to an animal and be eating from the ground if he doesn’t stop dragging his name and that of his biological mother into the mud.

Reverend Owusu Bempah threatened to teach Pastor Chief a big lesson if he doesn’t shut up from spewing venom about his mother.

The President Nana Addo Dankwa Akufo-Addo is said to have sent a delegation led by the Ashanti Regional Chairman of ruling New Patriotic Party (NPP) to intervene in the fracas between Prophet 1 and Reverend Owusu Bempah.

But in a video sighted by MyNewsGh.com, he fumed, ‘How can you say that my mother marries me spiritually, you let your junior pastors insult me. I would have turned Opambour’s junior pastor Chief into a mad person where he will eat sand, if not for President Akufo-Addo and some elders who have talked to me. I need to respect their advice, that’s why I have kept quite else that small boy Chief would start to eat sand. I’m telling you the truth’.

In a recent preaching, Reverend Owusu Bempah mentioned good pastors and churches his congregation and other people can worship.

Pastor Chief in a rebuttal which was reported by this portal claimed Reverend Owusu Bempah’s mother marries him spiritually hence his inability to have a stable marriage.

Pastor Chief advised Reverend Owusu Bempah to beg his mother to break womanizing curse on him.

‘I will be very ashamed if I were part of your junior pastors. I will be very sad to be under you because you don’t have good morals to teach me. Always sleeping around with women, you are now with a fifth wife, what kind of a pastor are you?. Deliver your mother from marrying you spiritually, so that you will be free to marry. Can you compare your fake prophecies to that of Prophet 1’s authentic prophecies? Useless Rev. Owusu Bempah,’ Pastor Chief spewed in a video sighted by MyNewsGh.com.

He said Prophet 1 doesn’t have any power to curse his junior pastors warning him to cease fire else he will face his wrath.