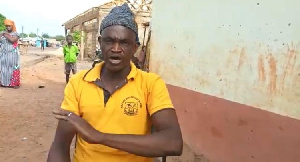 The family of the covid-19 patient who died at the Walewale government hospital in the North East Region have refused to accept the test result which suggested that their son died of Coronavirus.

According to the family, their 19-year-old son was abandoned and neglected by health officials at the Walewale hospital which led to his death and not Covid-19 as speculated.

The spokesperson of the family, Ibrahim Alhassan told journalists that the report from the hospital is a complete fabrication.

“We are not saying the disease doesn’t exist; they abandoned our son to die so for us he died as an asthmatic patient and not that the virus killed him, they handed over the body to us to go and bury. So why did they give us the body when you know it’s infected,” he asked.

A patient died at the Walewale government hospital after he was brought to the hospital coughing and showing symptoms of Covid-19.

The West Mamprusi Municipal Chief Executive(MCE), Issahaku Aremeyaw Somo, who confirmed the incident to DGN Online, said the deceased was an asthmatic patient who visited the Walewale hospital regularly for treatment.

According to the MCE, the patient died some few hours after he visited the hospital and sample was taken and sent to the Kumasi Centre for Collaborative Research (KCCR) for testing.

He indicated that they received the results on April 9, and it was positive.

Mr. Somo reveled that the deceased has since been buried by the covid-19 burial committee in line with the advise from the Ghana Health Service.

Meanwhile, residents are living in fear since news broke that a native died of the covid-19 virus.

It has emerged that the deceased covid-19 patient have no international travel history.

North East Region is the fourth region from the five regions of the north to have recorded its covid-19 case.