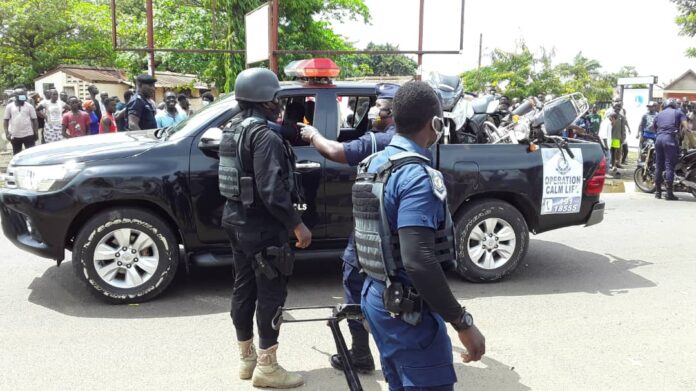 Four more persons believed to be connected to the Western Togoland campaigners have been arrested in an ongoing operation by the Formed Police Unit (FPU) in the North Tongu district of the Volta region.

The Formed Police Unit (FPU) from Accra is a reinforcement team deployed to the area, following Friday’s disturbances which led to an attack on the Aveyime and Mepe police stations and the North Tongu district assembly.

The separatists also mounted roadblocks on the Sogakope-Accra and the Ho-Accra highways at Tefle, Akrade and Juapong on the two roads.

The incident which led to a standoff cross-fire between the various groups and security personnel has left many injured while one young man also lost his life at Juapong.

The group in its coordinated attack also looted the Aveyime police station armoury; making away with 14 AK47 riffles, 5 pump-action guns, a Toyota Land Cruiser vehicle and another Toyota Hilux pick-up from the office of the North Tongu district assembly.

Though the vehicles including 4 of the 14 AK47 riffles have been retrieved, the remaining ammunitions are still at large.

Speaking to journalists on Sunday, at Aveyime, leader of the FPU, DSP Johnson Bediako said his team is resolute on ensuring that peace returns to the area.

He said, “The situation is under control and the situation is calm in the area. Since the attack on the police and the District Assembly, there hasn’t been any further attack on any facility since we came in. We have managed to stabilize security so far in the area. We have managed to pick about four people for interrogation based on intelligence we gathered. But the community should be assured of stability because the police are in area and there are no fears.”

Meanwhile, Member of Parliament for the area Samuel Okudjeto Ablakwa has expressed fear at the incident while cautioning government not to take the groups actions for granted; noting that activities of the group can destabilize not only the Volta but the country and sub-region at large.

“This is beginning to metamorphose into something else which can destabilize not only the Volta Region but the whole country. Our national security which has the constitutional mandate and the President must speak up on this matter.”

The MP also appealed to youths in his constituency to shy away from the activities of the separatists, who are bent on destabilizing the peace and tranquility the country is currently enjoying.

Previous Ex-Minister takes on alleged lesbian soldier who married partner in uniform
Next UE/R: Over 400 residents protest over their missing names in voter’s register