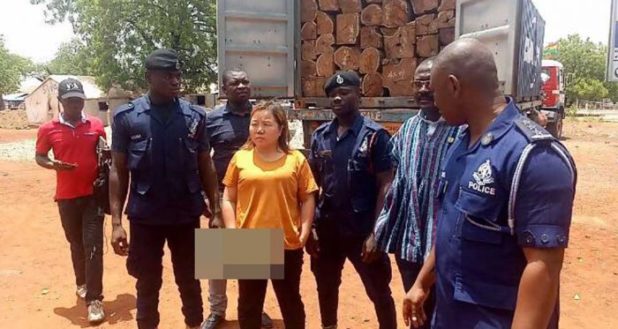 The Northern Regional Police Command says it is yet to locate the whereabouts of the fugitive Chinese Rosewood smuggler, Helen Huang more than two weeks after she jumped bail.

The person who stood surety for Madama Huang, Mohammed Bundrigbum was therefore arrested and granted a GHC3,000 bail on May 13, after he failed to produce her.

The Public Relations Officer of the Northern Regional Police Command DSP Yusif Tanko in an interview with Joy News said the Police is still on a manhunt for Helen Huang.

“We’re still looking for Helen Huang to arrest her to assist in our investigations and possible prosecution. The surety has gone to court for the second time and he has not been able to produce her. He’s been given another opportunity to produce her, but that notwithstanding we have not left the task on the head of the surety alone.”

Helen Huang was arrested in Tamale early this month for transporting trucks of Rosewood lumbers and charged with possessing banned forestry products.

But she was declared missing two days after being granted a police Inquiry bail.

Helen Huang accused checkpoint officers of demanding a ¢8,000 bribe before her arrest.