Breaking News
Home / CRIME AND PUNISHMENT / We are shocked by his actions ; Church of main suspect in Kasoa police killing reacts

We are shocked by his actions ; Church of main suspect in Kasoa police killing reacts 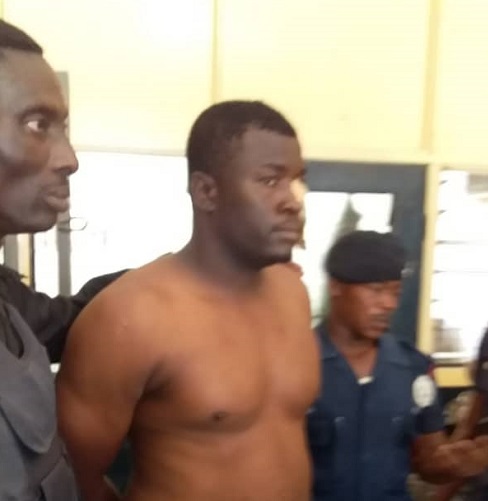 Leaders of Strong Living Fire in Dansoman in Accra said they are shocked by the actions of one of their members, Eric Duah who is linked to the killing of two police officers at Gomoa Buduburam near Kasoa in the Central Region.

Eric Duah is said to be the first child of the founder of the church, Elizabeth Duah and was raised in a staunch Christian home.

The administrator for the Church, Stella Brown said the suspects’ deceased mother was a strict disciplinarian.

“Knowing mama Lizzy you can’t sit there and do something that is contrary to what the Bible teaches and I know for sure that even if Eric was misbehaving at home, his is grown so I can’t say the rod but she will talk about it,” she said in an interview with Joy FM.

Ghana Police Service have arrested the main suspect who killed two police officers at Gomoa Buduburam near Kasoa in the Central Region.

The suspect Eric Kojo Duah was arrested at Akosombo in the Eastern Region while on his way to the Volta Region.

The information contained in the signal indicated that “policemen detailed on duty at Atimpoku bridge were alerted to arrest occupants of a black Golf car with registration number GW 5972-18 heading towards Volta region”.

Eric Duah was said to have a plaster on the left side of his face at the time of his arrest.

Lawyer and former Dean of GIMPA Law School, Kofi Abotsi has advised Ghanaians to refrain from politicising criminal activities in the country.

Speaking to the issue of lack of training for policemen making it difficult for them to combat crime on Joy FM, Kofi Abotsi said lack of training augments the issues bedevilling the police service but lack of logistics also plays a major part for them not to be very effective as expected.

Kofi Abosti bemoaned the inability of the government to provide the necessary accoutrements for policemen who especially take frontlines in maintaining law and order.

“The reality is that crime has been growing in complexity and sophistication… so when you combined these two what you have is a disparity you have a situation where people who are put on the front lines are simply not given the tools of their work, now training represents the tool of your work if you don’t have training you lack the tools of your work..”

He also advised Ghanaians to depoliticise crime to enable the straight steps to be taken to find solutions to some avoidable crimes in the country.

“But the reality is let’s depoliticised this, crime has no colour and when armed robbers show up they won’t ask which party you belong to therefore there some things that need to be stated as non-political and crime is one of those..”