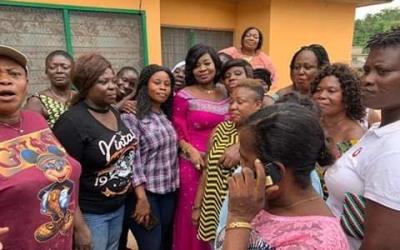 The families of the three kidnapped Takoradi girls are of the view that the DNA results released by the police that sought to confirm the death of their kins are part of attempts to close the docket on the case.

The family, at a press conference organised to react to an earlier announcement by the Inspector General of Police, James Oppong Boanuh, said they have doubts over the DNA report as released by the police.

The family have, therefore, asked the police to provide further evidence on the test conducted.

Apart from their doubts, the family has also taken issues with the “culturally unacceptable procedure” adopted by the police in announcing the girls’ deaths to the family, asking why they chose to do so in the night.

The police, through the Inspector-General of Police, James Oppong Boanuh, had announced Monday evening that a DNA test carried out on some human remains found in a septic tank near a facility occupied by the prime suspected in the kidnapping case, have been confirmed to be that of the missing girls.

Watch the featured video above for more on the families’ press conference.

Previous Missing girls: Police booed, hooted and chased away in Takoradi
Next The road to power passes through Ashanti – Asantehene warns Mahama