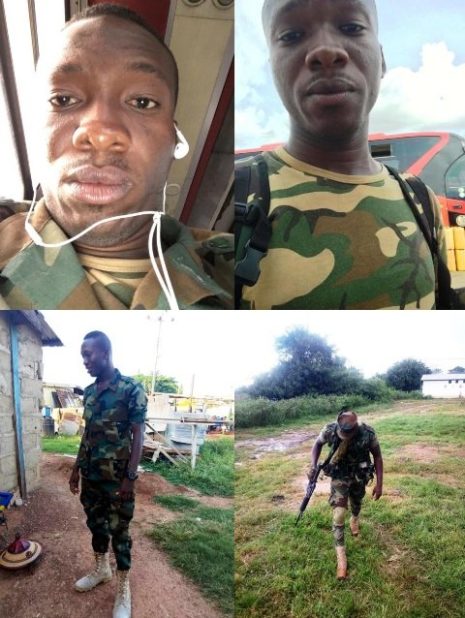 A search conducted in the room of Ahmed Tijani Abubakari revealed, a military bag with a set of camouflage military uniform, a jacket, two pair of boots and a Ghanaian passport bearing his name and photo.

A 28-old-year young man posing as a soldier has been arrested by the Military Detachment in Tumu, in the Sissala East Municipality, and handed over to the police for further questioning.

The alleged fake military man, Mr Ahmed Tijani Abubakari, was nabbed on Thursday at about 09:00 hours after visiting the Military Detachment in full military regalia.

He was accused of dressing in military shorts and portraying himself wrongly after trying to greet the military officers on duty.

According to a military source, Tijani also failed to identify his station and unit, as well as not being able to mention his service number and name of his commanding officer.

This heightened the suspicion of the officers on duty, who quickly arrested him and subsequently handed him over to the Tumu Municipal Police.

The Military expressed worry about such imposters who could easily defraud unsuspecting people with the uniform and advised the public to report such suspicious characters to the appropriate authorities.

Chief Inspector Geoffrey Hor, the Tumu Police Station Officer, said the young man in question normally visits the area and holds himself as a military officer until his arrest.

A search conducted in his room revealed a military bag with a set of camouflage military uniform, a jacket, two pair of boots and a Ghanaian passport bearing his name and photo.

Pictures on his mobile phone also showed Tijani dressed in a military uniform whilst others depicted him holding an assault rifle gun.

Chief Inspector Hor said provisional charges of impersonation and possession of military accoutrement without authority was being preferred against him whilst investigation continuous.

The presence of the military detachment in Tumu in the Sissala East and West is in response to the presence of Burkinabe immigrants and suspected terrorists threats from Burkina Faso.

The troops are patrolling the borders from Hamile through Fielmuo to Gwollu, Kupulima to Kassana, Banu and Pido, in an attempt to protect the citizenry against harm.