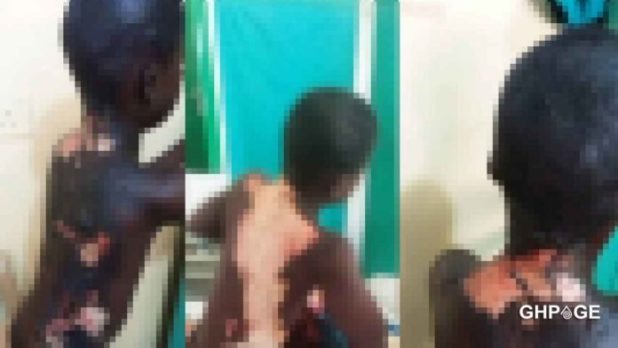 Kasoa in the last few days has been the centre of atrocities and is gradually becoming a dangerous place to stay as there are issues of violence coming out every single day.

Even before the dust settles on the heart-wrenching murder of a 10-year-old boy, Ishmael Mensah that has got everyone tearing up comes another shocking news from the same area of the murder.

Per reports at available, the minor was on an errand for his mother to buy a shoe when the teenager met him holding a little jar of petrol, poured on him and lit a fire at that moment.

Describing this monstrous act to Afia Pokua on UTV via a phone-in interview, the mother of the 10-year-old who’s also a nursing mother said her son upon return from the errand realized that he was with severe burns crying in such anguish.

The mother named Cynthia again revealed that she quickly reported and called for the arrest of the youngster who carried out this barbaric act at Amanfrom Police Station but to her surprise, he has been freed.

Cynthia explains the boy(Hammer) upon his initial arrest confessed to being 18 years but his father at the police station vehemently argued that his son is 14 years.

This according to her, made the police let go of Hammer giving reasons that they (police) cannot arrest and put him behind bars because he’s underage and that she should go to court to seek justice.

Watch the video below;

The little boy is currently receiving treatment at Amanfrom Hospital.