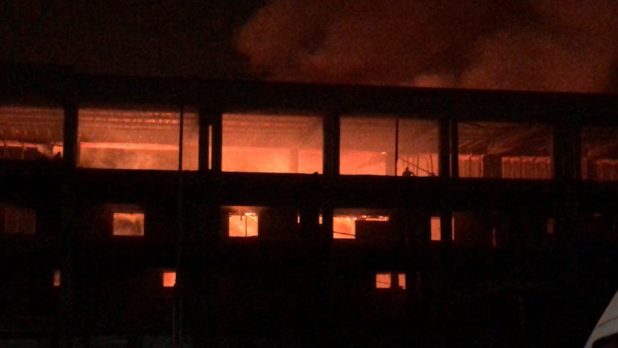 More than 200 shops were on Easter day ravaged by fire at Asafo Market barely a day after some shops on the main road of the same market were burnt in similar fashion.

The traders who could hardly hold back their tears disclosed to MyNewsGh.com that they have lost property estimated at several millions of Ghana cedis and suspect that some unscrupulous persons deliberately set fire on the stores for which reason is unknown.
Over 200 shops have been burnt into ashes in the second inferno that hit the market on Easter Sunday less than 24-hourss after one on Easter Saturday that consumed over 400 shops.

Traders who spoke to Pure Fm’s Osei Kwadwo want the police to conduct thorough investigation into the matter revealing that this could not be a mere coincidence but an act by some group of persons in pursuit of a parochial interest.
Personnel of the National Fire Service arrived at the scene on time after the market caught fire but could not get access to the place early.
The fire started around 8pm but as 10pm the firefighters were still battling the inferno.

The cause of the fire is not yet established.