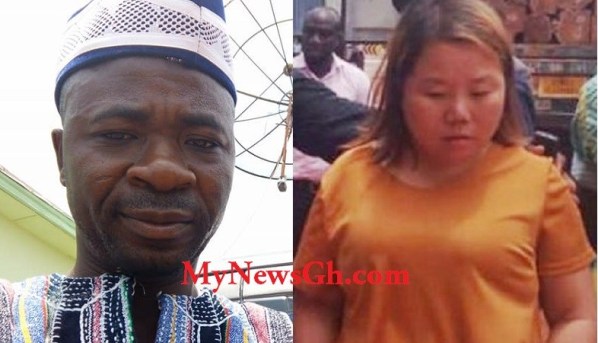 A Tamale-based freelance journalist, Mohammed Bondirigbum has landed himself in a big trouble after standing surety for Ms Helen Huang, the Chinese woman who was recently arrested for illegally logging rosewood in the Savannah region.

The woman is reported to have jumped bail forcing the court to hold the journalist responsible since he stood surety; but Mr. Bondirigbum who claims he does not have any connections with the suspect, revealed that he only stood surety for her on humanitarian grounds.

Ms Helen Huang since she was granted bail, has gone missing and her whereabouts currently unknown with sections suggesting she may have fled the country using an unapproved route.
Mr. Bondirigbum who stood surety for her, on Tuesday met his bail conditions of two government workers who earn GH¢ 3,000 each or landed property worth about GH¢ 130,000 given by a Tamale Circuit Court presided over by Justice Twumasi Appiah.
He claims he knows the whereabouts of the suspect and would need up to 30 days to produce her and absolve himself of prosecution expressing regrets for involving himself in Helena Huang’s case

The court is expected to hear the case on May 22, 2019.
It would be recalled that the 43-year-old Chinese woman was arrested by the Tamale Regional Police Command for allegedly possessing large quantities of rosewood illegally on May 7.
She was arrested with two trucks carrying four containers of rosewood, which has been banned.
The Northern Regional Crime Officer, Superintendent Otuo Acheampong, confirmed that Helen Huang had defied an order to report to the police station.

Following the arrest of Ms Helen Huang for illegal possession of Rosewood, the Savannah Regional Minister, Salifu Adam Braimah, shut down Brivywells Company, a logging company near Damongo, which is said to belong to Helen Huang.