Talensi: Man who sacrificed his daughter and wife for rituals ARRESTED 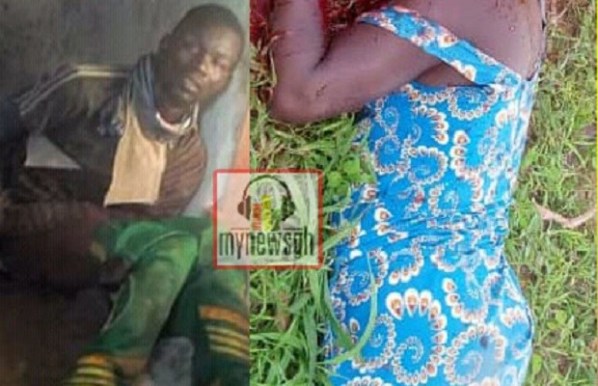 MyNewsGh.com has confirmed the arrest of 35-year-old Collins Yagbil who sacrificed his daughter and wife for rituals and his shrine in his home a Kulpelga Community in the Talensi District of the Upper East Region.

The suspect who is currently being interrogated at the Regional Criminal Investigation Department (CID) was arrested on Thursday afternoon after the dastardly act that left the community members in shock.

His house has also been burnt down by angry community members in the heat of the raging tension between families of the suspect and his wife. MyNewsGh.com checks at the community however reveal that calm has been returned to area following his arrest

Meanwhile, the bodies of the wife and about 2-year-old daughter have been deposited at the Bolgatanga Teaching Hospital mortuary pending autopsy.

It would be recalled that MyNewsGh.com on Thursday reported of how the suspect who is into rituals dragged his 8-year-old son into a shrine to sacrifice him to his gods.

After slashing the throat of the boy and spilling the blood on the gods, the little girl screamed which angered the father to behead and cut off both hands of the poor little girl.

Sensing danger, his wife attempted to shout and draw the attention of their neighbours but was attacked by the husband and beheaded as well.

The situation led to a scuffle between the woman’s families who are in-laws to the suspect to storm the community to lynch him but met a resistance from the community members.