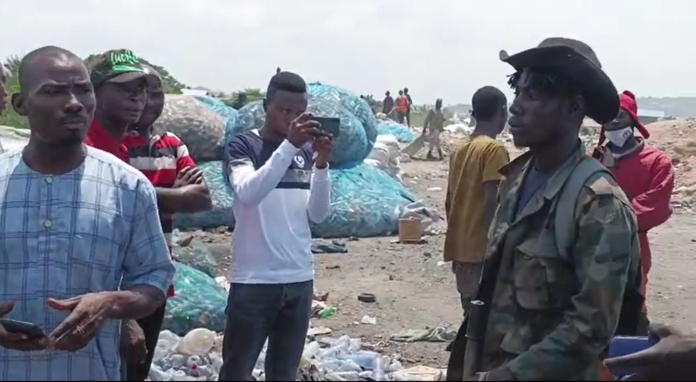 Five refuse collectors are seriously injured after clashes with Military officers from the Weija Municipal Assembly.

Speaking to Adom News, head of the refuse collectors, Moro Zakari, revealed that over five persons sustained head injuries and were transferred to the hospital for treatment.

Some of the tricycles belonging to the collectors were damaged during the altercation with the officers at Tetegu.

Some of the collectors accused Patrick Kumor, Municipal Chief Executive of Weija-Gbawe area, of deliberately frustrating them out of business to his advantage.

The Mamprosi Chief of Darkoman, Hamidu Majeed, who visited the scene, advised the MCE against the use of the Military to intimidate the citizens but rather adopt amicable way of solving their dispute.

Reports of possible coup in Burkina Faso: National TV off amid heavy gunfire

Another suspect arrested in connection with the Mankessim murder

Floods kill another person at Anwomaso-Bebre in Ashanti Region

Video: Pregnant woman, 3 others died in gory accident at Kronum

Man commits suicide after killing his wife at Berekum

The suspect had earlier threathened to kill his wife Residents of Kota, a …