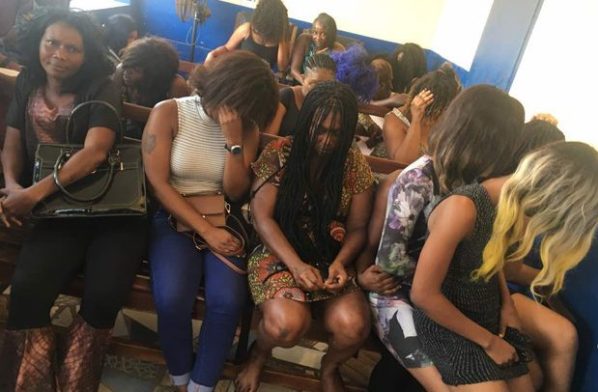 It has been confirmed that teenage prostitutes who were trafficked into the country were required to undergo blood rituals but their Queen Mother, Chioma Sabina Abaraonye.

This was to ensure that they never divulge the secret of the business they were engaged in to their relations back home in Nigeria after being promised decent jobs in Ghana as sales girl.

“When we came, the madam and her Ghanaian accomplice called Sof took our blood, fingernails, and pubic hair. And told us that now that they have those things from us, if anyone reveals the secret, they will make the person Mad.” One of the victims painfully recounted.

Following the arrest of Chioma Sabina Abaraonye described as Queen Mother of Tamale prostitutes, it was discovered that dozens of Nigerian girls had been trafficked into the country to engage in prostitution as that remained the only source of livelihood for them.

Her victims who resign to their fate thereafter, said they are asked to pay an amount of GH¢ 8000 each to the trafficker on arrival in Ghana with a daily target of at least GH¢100 from each of the trafficked girls.

“Each night we have to bring at least 100 cedis, otherwise, they will beat us” says one of the victims.

The Tamale Metropolis since the African Cup of Nations (AFCON) in 2008 of which it played host to some of the participating teams has become a breeding ground for prostitution involving some teenagers.

Some of these prostitutes from neighbouring countries appear to have been operating in the city ever since raising concerns about the commitment of city authorities in dealing with the situation.

It is gathered that prominent drinking bars and a hotel (name withheld) serves as operational area for these commercial sex workers who charged between GH¢100 to GH¢150 for a hot sexual bout.

The presence of these harlots in the region has kept most drinking spots and bars operating 24-hours.

The Bank of Ghana road and the main Hospital road opposite the Volta River Authority have now become
more busy than they used to as these harlots would not spare any gorgeously dressed gentleman who passes by.

Though some of them are unable to speak the local dialect properly, some woo their clients through missing link signs as if they were deaf and dumb.

But Mayor of Tamale, Iddrisu Musah Superior has served noticed he is determined to weed them out of the ancient city as part of measures in restoring the lost moral fiber in society.

Justifying his action he quoted the Criminal Offences Act 1960 (Act 29) section 274 which states “) Any person who knowingly lives wholly or in part on the earnings of prostitution; or is proved to have, for the purposes of gain, exercised control, direction or influence over the movements of a prostitute in such manner as to aid, abet or compel the prostitution with any person or generally, shall be guilty of a misdemeanor.