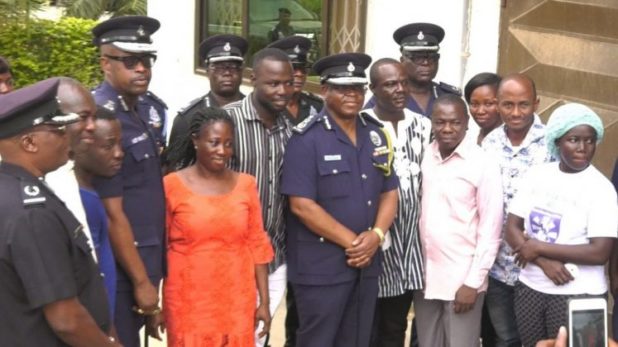 A 35-year-old Takoradi based taxi driver was nearly lynched after he was hired by four persons to go and rescue one of the kidnapped Takoradi girls – later confirmed dead by DNA – in a mission that turned futile.

Together with the mother of the driver, Comfort Awoyie, who is the wife of the driver, walked in to the studios of Connect FM on Monday morning to narrate the incident to the station’s OMANBAPA morning show host, Nhyiraba Paa Kwesi Simpson

According to the driver’s wife, one Hon Seidu Adam, an Assembly member from Effiakuma, and three other persons claimed they had a hint that one of the missing Takoradi girls had been spotted in a certain village near Teleku Bokazo in the Western Region.

Without the knowledge of any security agency, the four – said to be members of the National Democratic Congress (NDC) – hired a taxi from Takoradi to the said location at Nzema without even disclosing their mission to the driver.

They entered the town only to realise the person they suspected to be one of the kidnapped victims was not her, after all.

The community members rather suspected the four including the taxi driver to be kidnappers who had wanted to kidnap their ‘daughter’.

They raised an alarm and the four NDC members bolted, leaving behind the taxi driver to his fate

“My husband told me he suddenly he realised many youths from the community had surrounded him,” Comfort Awoyie explained.

The taxi driver, Collins Ato Turkson, was beaten to the pulp, sustaining knife wounds all over his body till some persons came to his rescue.

His car was damaged, tyres loosed and ignition keys seized.

The driver, who was aided by some good Samaritans to go back to Takoradi, arrived home late in the night on Saturday to recount his ordeal to his family.

To the utter amazement of the driver, the four persons who hired him had returned home safely without whispering what had happened to anyone including the family of the driver whom the four know very well.

Report has since been lodged with the police, who are investigating the case.