Pupil,14, defiled on her way to school, struggles with 4-month-old baby 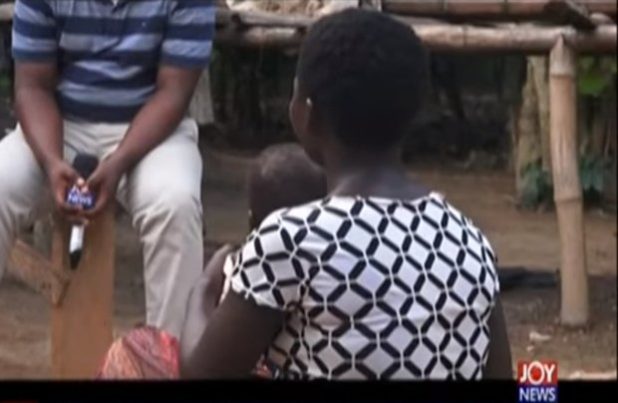 Police are on a manhunt for a teenager who allegedly defiled a 13-year-old girl at Ntom, a town in the Upper Denkyira West district in the Central region.

The man who has allegedly admitted committing the crime has since fled the town with his mother, to escape the wheels of justice.

JoyNews’ Ernest Manu who visited the victim and his family at their farmhouse learnt, Ekua [not her real name] was defiled on her way to school in 2018.

Her parents say Ekua, who is the second of eight children, takes her education seriously and walks several kilometres to school.

But on that fateful day, she said a boy who accosted her on her way to school, forcibly had sex with her in a bush.

Ekua, who is now 14-years old, got pregnant and now has a 4-month-old baby.

Looking very shy and carrying her baby, she told the reporter, she didn’t know she was pregnant until her mother and teacher said so.

She had kept quiet because the juvenile perpetrator had threatened to kill her if she told anybody.

Ekua said every time she hears the cry of her baby she remembers the pain she went through.

Ekua’s father, Jonathan Sey, said he reported the issue first to an NGO, World Vision Ghana, the police and then to the Social Welfare Department.

The perpetrator, he said, took responsibility for the pregnancy and promised to take care of the child. But that would be the last time he’d set eyes on him.

Meanwhile, the chiefs of Ntom insisted that some purification be done because it was a taboo to have any form of sex in the bush.

According to them, failure to perform those rituals could result in the death of either the 14-year-old, her baby or both.

Ekua is also being stigmatised by her mates at school and residents within the community. The stigma, her father said, has affected their desire to seek justice.

World Vision Ghana has pledged the NGO’s support for Ekua and her family.

The NGO’s Head of Child Protection and Advocacy, Gregory Derry, has called on the state to find the suspect and ensure Ekua’s family gets justice.

Ekua has revealed her determination to go back to school.