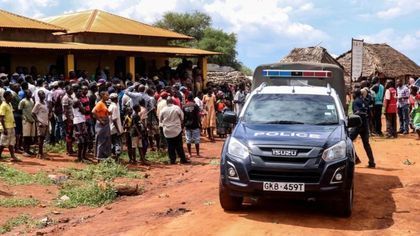 The Accra Regional Police Command has rescued a woman who was kidnapped by some Nigerian nationals at Amasaman in the Ga West Municipality.

According to the police, the victim was captured in her home and driven to an unknown location where the kidnappers reached out to her husband demanding a ransom.

The altercation at the victim’s residence, according to the police, left her house help in critical condition.

The Public Relations Officer of the Accra Regional Police Command, DSP Afia Tenge, said one of the perpetrators has been arrested, while a manhunt has been launched for the others.

Narrating the incident to Citi News, she said the police noticed unusual activity in a bush in the area around 10 pm and chanced on the suspects who lied that they were there because their vehicle had broken down.

“In the course of the police duty tour around 10pm on Monday night, the team noticed an unusual movement. They met this woman who had been tied up both on the leg and also on the hand and the suspects, two suspects, Nigerians demanded ransom from her husband. Initially, they told police some lies that they had developed some problem with their vehicle that was why they were in that part of the bush at that time but the police were not convinced about it. This woman was seen unfortunately tied up and she was rescued,” DSP Afia Tenge said.

DSP Afia Tenge has, therefore, cautioned the public against suspicious characters in their neighbourhoods, urging them to inform the police of any such character.

Kidnapping is not a common phenomenon in Ghana however in recent times there have been series of such reported incidents with three teenage girls who were kidnapped in 2018 in the Western Region yet to be reunited with their families.

A principal suspect, in that case, a Nigerian, is currently assisting police in investigations.

Previous “Robert Mugabe dies”…tales of a survivor
Next Writing exams on board: Education Minister blasts teachers