No arrests made in fatal Achimota clashes 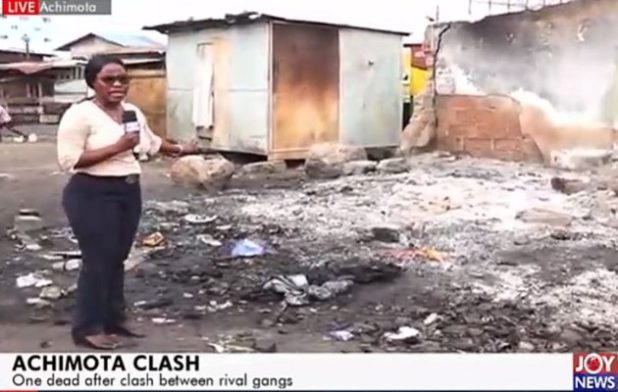 Homes and other structures were pulled down by the rampaging youth.
E-mailTweetWhatsAppShareShare

Police have confirmed that no arrests have been made relating to violent clashes at Achimota in Accra on Tuesday.

The Tesano Division Commander, ACP Oduro Amaning told Joy News Wednesday morning that they are now “gathering names of people who took part in the [burning down of homes].”

The rampaging youth did not allow their victims to salvage any property from the homes.

“One of them hauled a cutlass at me and asked me not to bring out any property. Everything is destroyed,” one of the residents said.

The group, according to the brother of the deceased was only reacting after his brother was reportedly stabbed to death by another group from the community which has now been burnt down.

ACP Amaning said the only information available to the police now is that the deceased was stabbed by a group led by a man only identified as Ibrahim over disagreements over some money.

The officer also lamented on how difficult it is to get the parties and residents to volunteer information to the police.

Despite conceding that many crimes have been reported from the area, ACP Amaning says such crimes are difficult to investigate since either the information given is not coherent or evidence given is none existent.

“They tell us someone has been stabbed and is laying there but you go there and there is no corpse and we follow up to the hospitals and there are no such persons sent there,” he lamented.

He, however, said they are investigating the current case as they have already visited the scene.

Previous Prostitutes, junkies take over Asomdwee Park
Next Commander put his hand in my panty: Woman justifies why she poured soup on policeman