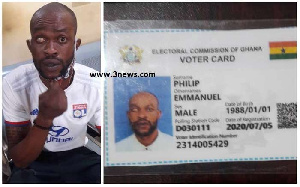 Emmanuel Philip is in the custody of the police

The Aflao Sector Command of the Ghana Immigration Service (GIS) has arrested one Emmanuel Phillip, suspected to be a Nigerian by nationality, with the new Ghana voter ID card.

The Command, stationed in Ketu South in the Volta Region, nabbed the suspect on Monday, July 6 when he attempted to illegally enter Ghana through the main Aflao border.

A statement issued by Assistant Inspector Felix Klu-Adjei on Thursday said a search conducted on him found the new voter ID card.

Upon interrogation by the Aflao Sector Commander of GIS, Chief Superintendent Frederick Baah Duodu, the suspect said he lives with one Jerry Azametsi, a native of Aflao, and his wife, Abigail Togbor.

He confessed that the two had persuaded him to register and they even stood in as guarantors for him.

After invitation to assist in investigations, Mr Azametsi confessed that he aided his Nigerian friend who lives in Togo but visits regularly to register for the new voter ID card. He admitted that he only asked him to take advantage of the registration exercise and get the card.

“The Aflao Sector Command of the GIS has since handed over the prime suspect and the two guarantors to the Aflao District Police for further investigation and subsequent prosecution.”

Previous Family rejects body of relative alleged to have died from Covid-19
Next Fuel hikes: GPRTU Chairman mobilizes drivers to campaign against Akufo-Addo